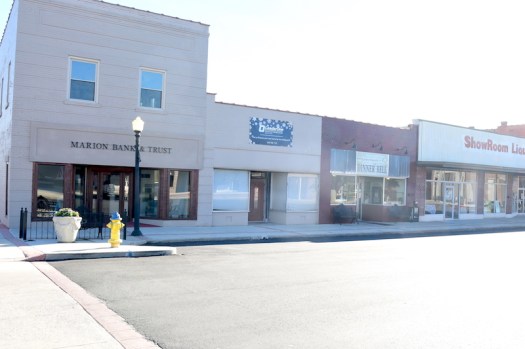 This section of downtown has seen a lot of activity in the past few years. Marion Bank opened this location in 2020. Leader One and The Jacks Family Dinner Bell opened in 2021. 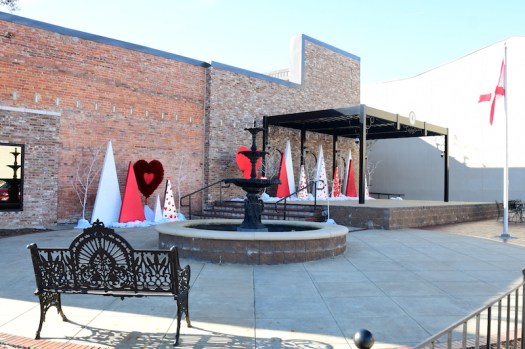 Corner Park received improvements to the stage in 2021. Holiday displays were added for Christmas and then for Valentine’s Day in 2022.

Editor’s note: This article originally published in “Progress 2022: Centers of Community.” Copies of this magazine are available at 1109 Seventh St. N in Clanton.

Story and photos BY JOYANNA LOVE

Throughout history cities and towns have grown from the development of just a few streets.

Cities grow from these first few businesses, but these original downtown areas can get forgotten as new opportunities present themselves.

Revitalization efforts are often needed to bring the fo­cus back to the downtown areas.

In recent years, local business owners have had a re­newed interest in downtown Clanton, bringing activity to previously empty buildings.

City leadership has also focused on downtown as a part of its improvement projects.

Mayor Jeff Mims said it “feels good” to see the busi­ness interest in the area.

“Having these businesses downtown, it’s exciting to me,” Mims said.

Rachel Martin, executive director for the Chilton County Chamber of Commerce, said that when any city’s downtown is thriving it brings benefits to the whole city and even those who live outside its limits.

“You are giving everyone something to do where you can stay in the county,” Martin said.

The Jacks Family Dinner Bell moved into a location that had recently become empty when another restau­rant closed.

“We’ve had the idea for about 10 years, and we’ve been saving for

it,” Sherrie Jacks, who owns the restaurant with her husband Donathon, said in an interview about the opening. “We’re not getting any younger, and we decided, with not a lot of sit-down restaurants in town … now is the best time to do it.”

The Frozen Goat was named in memory of co-owner Nicole Fuller’s son who loved goats.

Nicole owns the restaurant with her husband Nate.

When retail store Sew Charming moved out of its Seventh Street location downtown, it was just a few months before another local retailer Apple & Lo chose the location for its new home.

“We are just really excited for the growth and the progress that has been made,” Martin said.

In addition to new restaurants and retail in the past year, entertainment-oriented businesses have also located downtown. This is something that had been missing from the downtown district in the past.

The Bearded Peach has begun having live music, while Peach City Billiards provides something to do in the afternoon and evening.

“I love the location right here on Second Avenue, being right down the road from The Bearded Peach,” Austin Dennis of Peach City Billiards said. We send people to them, and they send people to us all the time.”

The Chilton County Chamber of Commerce also moved its office to downtown Clanton in 2021.

“This location has been perfect for the Chamber because people just walk in,” Martin said.

Some people have walked in not really knowing what was in the building and have learned about the Chamber and the county as a result.

“It’s just made a big difference, it has made us more relevant more known about being here in downtown,” Martin said.

Having higher visibility has helped the organization to better serve the entire county.

Adding lighting to alleyways was also made a priority.

“I am trying to get it to where if we are having something in town at night people can park at River Bank, and we have that parking lot that we own behind the Frozen Goat … they can park back there … We will light that alleyway and this one up here,” Mims said. “Then, if these businesses want to stay open at night, they will have somewhere for people to park and feel safe when they are walking through those alleys.”

These infrastructure improvements are important to promoting the area.

New things to do attract new visitors to the city and increase in­terest in people moving to the area, she said.

Part of the Chamber’s focus is “to keep these small businesses thriving, have people shopping local, but also out-of-towners com­ing here to shop.”

The mayor hopes to create a district with regulations specifical­ly crafted toward promoting entertainment opportunities six days a week. (Sunday would be excluded.) Renovations to Corner Park were a first step for this. Being able to have regular live entertain­ment at Corner Park where customers of nearby establishments can enjoy craft beer from The Bearded Peach and enjoy the music is one of the goals. Opportunities for food trucks in the district are also being explored.

Pursuing membership in MainStreet Alabama is another future goal for the city and the Chamber. Martin said it is a competitive program with a de­tailed application process.

Being a MainStreet Alabama member opens new resources for downtowns to develop plans for de­velopment and revitalization as well as grant appli­cations and statewide promotion.

“It is really just a guide and a help to get you where you need to be,” Martin said.

Only a select number of new members are ap­proved each year.

The city of Clanton saw a large jump in revenue generated from business licenses in 2021.

Mims said part of this jump was better record keep­ing to ensure that businesses operating out of people’s houses are getting the necessary business license.

A business license review board has been created to help new businesses determine what licenses are needed and where the business can locate based on zoning regulations.

Everyone can contribute to the city’s success by taking care of their part of it, the mayor said.

“If people will do that, you will see a whole lot more stuff, people wanting to do stuff in town,” Mims said. “The excitement is there.”

Improvements to the city’s parks have also be­gun and will continue to be a focus in the coming year as a master plan is developed and grants are applied for.