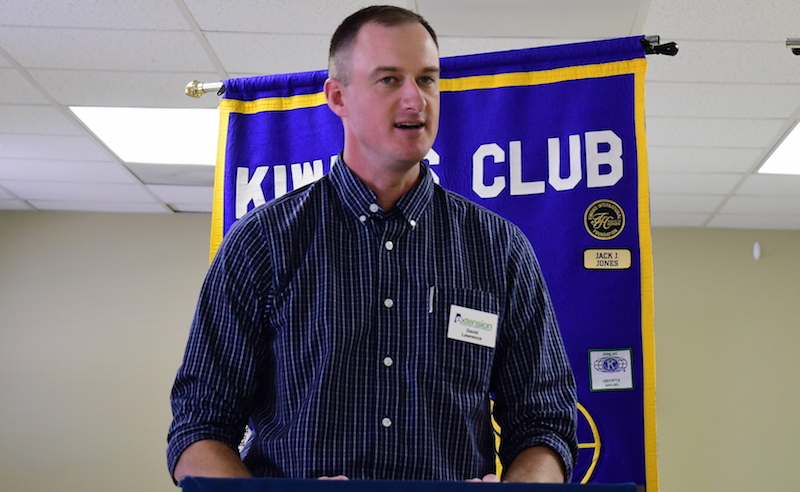 Potential impact on the peach crop from predicted cold weather this weekend was the first question Alabama Cooperative Extension Regional Agent David Lawrence was asked during a March 10 presentation to the Clanton Kiwanis Club.

“It is going to get cold,” Lawrence said. “A lot of our peaches are blooming right now, especially our early varieties.”

Varieties that are typically harvested through mid-June are in the blooming stage which means a prolonged frost late Saturday night, early Sunday morning could cause damage.

However, what the impact will be has a number of factors.

“It just depends,” Lawrence said. “It depends on the wind, the inversion layer, the dew point.”

An inversion layer occurs when there is a layer of warm air above a layer of cold air closer to the ground.

The wind on Saturday night into Sunday morning is what could be most concerning.

However, there are steps that peach growers can take to try and mitigate the damage.

“There are going to be a lot of growers who are either going to rent helicopters or burn fires,” Lawrence said.

Helicopters and wind machines can be used to move warm air closer to the ground and keep the peach blossoms warm.

However, if the wind is too strong, these methods cannot be used.

“That is a lot, but if you are a commercial grower and they save your crop, they can pay for themselves one time,” Lawrence said.

Lawrence said some farmers will burn brush piles in an attempt to keep the blossoms warm.

Strawberries will be covered to protect them. Lawrence said it will save the crop, but they will likely be ripe later than initially anticipated.

Another challenge facing local farmers this year is the increase of cost in supplies, Lawrence said.

There were more than 800 peach growers in the 1950s at the peak of production in the county. Today, there are a little less than 100 peach growers, producing about 75% of the peaches in the state, Lawrence said.

Lawrence had worked at the Auburn Research Station for the past several years before moving back to Chilton County to fill the commercial horticulture agent position at the Chilton Regional Research and Extension Center.

His position focuses on fruit and vegetable production.

“In Chilton County, as you can imagine I do a lot with peach trees,” Lawrence said.

“Extension was established in 1913 here in Alabama,” Lawrence said.

The Extension serve as a community services arm of the land grant universities Auburn University and Alabama A&M University.

“We try to reach everybody,” Lawrence said.

Each county in the state has an Extension Office.