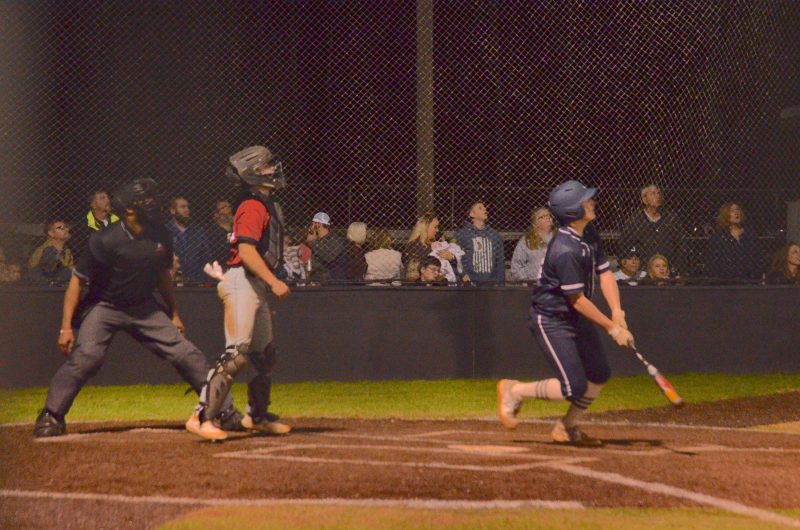 A Jemison batter admires his work at home plate after a hit. (CAREY REEDER | ADVERTISER)

For the second time in three days, Jemison High School took down Maplesville High School on the baseball field, this time 4-3 at home. The Panthers extended their winning streak to three games behind 10 strikeouts from senior Tyler Porter.

Hayden Robinson posted a 1-for-3 night with two RBIs and Guyton Pace went 2-for-3 with a run scored.

“They’re buying in and having fun, and it’s easier to have fun when you’re winning,” Jemison coach Phillip Easterling said. “We have a lot of seniors who are working hard, and it’s starting to pay off.”

The game was scoreless through the first three and a half innings before Jemison broke through in the bottom half of the third with Robinson reaching on an infield single to make it 1-0. Tucker Bean followed with an RBI double to make it 2-0.

Jemison (4-1) added two more runs in the fifth including Robinson laying down the suicide squeeze.

A young team still finding their way, Maplesville entered the top of the seventh needing four runs to keep playing. While Porter thru six innings of three hit, six walk baseball, he walked the first two Red Devils batters, and subsequently gave up an RBI single to Bradlee Padgett.

“We’ve always had a little rivalry with each other,” Maplesville coach Justin Little said. “Both teams love to compete, and I think that’s why it comes down to the wire.”

Porter gave way to Caeden Forbach on the mound, and he hit the first batter he saw to load the bases with no outs. Luke Gray plated two runs with a single to the outfield wall to cut the deficit down to 4-3.

An error loaded the bases again, but then Forbach dug deep. He struck out the next two batters to preserve the 4-3 win for the Panthers.

“Keep moving along, take it one day at a time, and let them take us where we need to go,” Easterling said. “We’re going to enjoy it while we can.”

Maplesville (0-3) is still looking for that first win of the season, but Little suspects brighter days ahead for the Red Devils.

“We’re finding little things each game that is helping us get better,” Little said. “Once we put it all together in one ballgame, I think we’ll be a good ball club.”

Both teams play Monday with Jemison hosting Dallas County at 4 p.m., and Maplesville traveling to Thorsby.