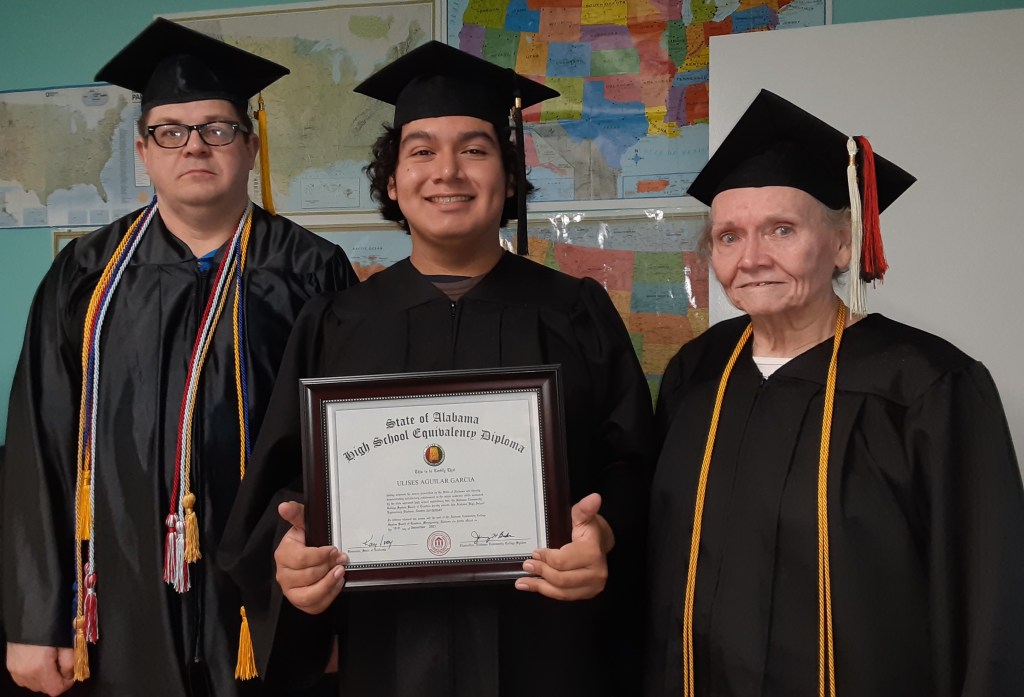 Getting a GED rather than a high school diploma can mean missing out on having a graduation ceremony.

However, for Ulises Aguilar Garcia’s family, having a ceremony was important.

Garcia attended classes at Kelsey’s Place in Clanton to prepare for the GED tests.

When his mother asked about a ceremony when Garcia completed the program, the organization agreed.

The ceremony was held at Kelsey’s Place on Feb. 26.

“I am actually very grateful for it because I was able to get my GED and start college earlier than I would have, if I did normal high school,” Garcia said.

Garcia had enrolled at Kelsey’s Place after he could not enroll in high school “for a couple of reasons” after moving to Jemison.

“They gave me a couple of options, and one of them was here,” Garcia said.

Garcia said he enjoyed the flexibility of when he could do the work.

Virginia Stevens, another instructor of Kelsey’s Place, said Garcia was committed to learning the material, often coming more than the typical two days a week.

“He has worked very, very hard to get this certificate,” Stevens said.

Garcia said the math portion was the most challenging, but he studied hard to be ready for the test.

“One of my best math students ever,” instructor James Pierce said.

Practice tests were a big part of his preparation for the test.

“You put in more work than I’ve ever seen, and I’ve been doing this for 20 years,” Pierce said.

Garcia completed his GED in time to enroll at Jefferson State Community College where he is an accounting major, in January.

Garcia said he chose accounting after talking about possibilities with his parents.