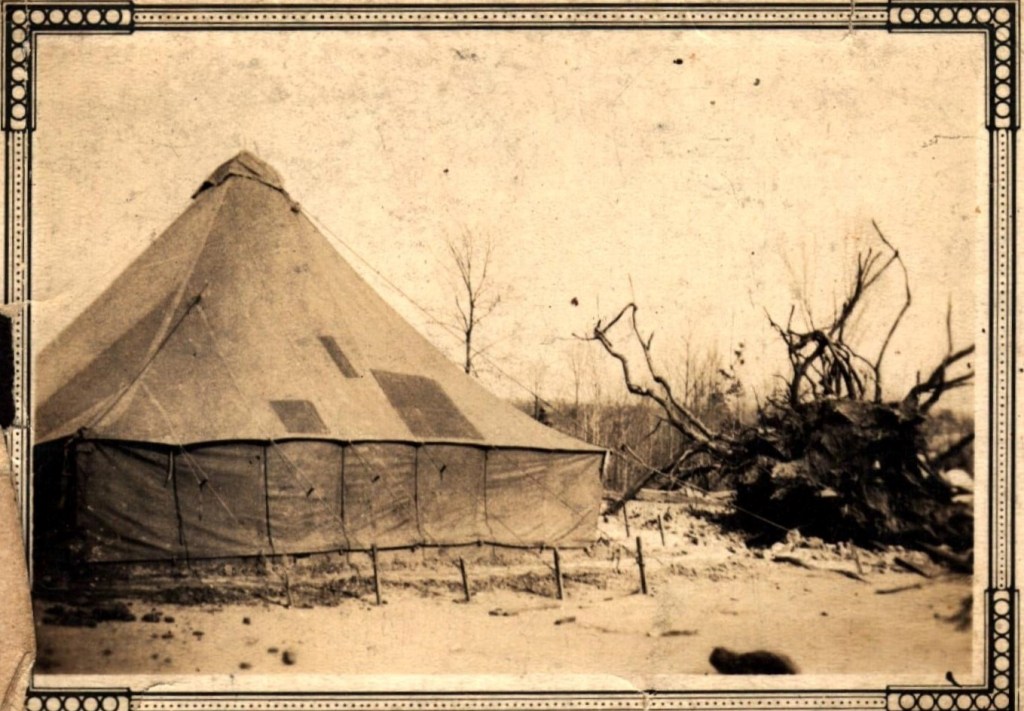 Tents erected for victims of the first storm were ripped apart and destroyed by the second tornado. An African American couple that lived on the west side of Thorsby lost their home in the March 23 tornado. They had been given a tent and supplies, only to have the second tornado visit them again, wiping out everything (again) and blew the wife some distance. The Union-Banner Newspaper reported that she was considerably bruised but not seriously injured. (Courtesy of Thorsby Historical Preservation Museum)

Spring is right around the corner and in Alabama that can only mean a mix of freezing weather mixed with sunshine. In that clash of warmth and cold, inclement weather arises. This March marks the 90th infamous anniversary of the deadly tornado that killed 55 Chilton County residents ranging in age from infancy to 88 years old. The 1932 tornado also destroyed at least 44 homes across Chilton County, notably drawing a line from Stanton, across Thorsby to Union Grove. An event described as “the greatest calamity that has ever befallen the people of Chilton County.”

Only six days after the March 23 tornado on Easter Sunday, another tornado passed through the county killing another six people bringing the death total to 61. Hundreds were reported injured. Tents that had been erected for victims of the first storm were ripped apart and destroyed by the second tornado.

Although 90 years have passed, there are still a few local residents that can still recall the devastation, and many others can recount stories told by their loved ones.

For those who were fortunate enough to live through the storm and keep their home, many others were still affected in some way or another. Many residents that had family members that lived through the event had a life-long fear of inclement weather.

Polly Watley, who passed away in 2021 at the age of 99, gave her account of how the tornado changed her life during a 2020 interview for The Clanton Advertiser. In 1932, Polly was in the third grade when the tornado swept through her community. Polly, her siblings and other neighborhood children walked to school at Pates Chapel Church, which doubled as a school during the week.

“After the tornado, I didn’t go back to school. I went to work on the farm,” said Polly. “I would dig up an onion, and take a piece of cornbread off the stove and eat it on the way to the fields.”

Not only was the church and school destroyed (putting an end to Watley’s education at the third grade), but her aunt and grandmother also died during the storm.

Community members immediately organized and donated to give aid and relief.  Residents took up a monetary collection. Tiffin-Klinner Furniture Company made arrangements with Birmingham manufacturers to provide goods such as “stoves, beds, springs, cots, and mattresses to storm sufferers.” The furniture advertisement read, “We shall be pleased to have your order through your local Red Cross agency. All orders of this kind will have special attention.”

The county hospital had been closed but was put back into service when 40 people were instantly admitted. Some churches held up to five funerals simultaneously following the event.

While technology has blessed people with better assurance of the future weather forecast, this anniversary is still a reminder to many to stay vigilant and aware as the warm weather rolls in.

In memory to all those that have perished during tornadic storms and their affected families.