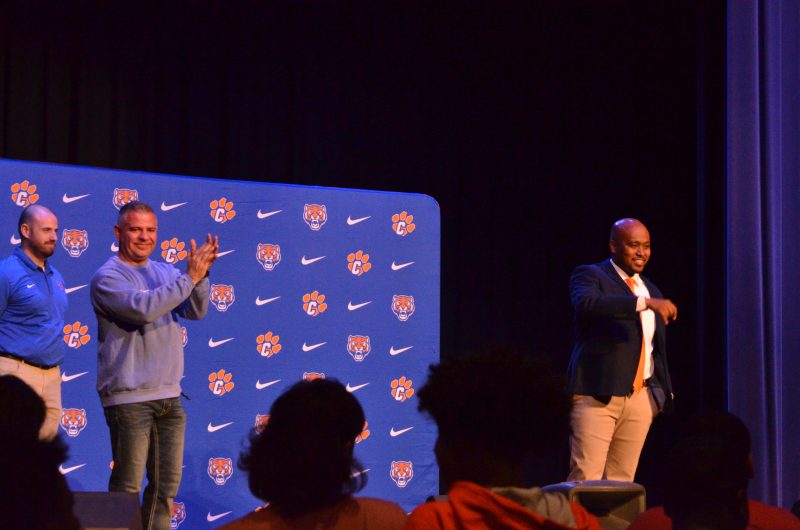 Marvin Morton is introduced in the CCHS auditorium by principal Ron Pinson to a shower of cheers from the CCHS players. (CAREY REEDER | ADVERTISER)

Chilton County High School named its next head football coach on Feb. 25 and kept the choice inhouse. Tiger defensive coordinator Marvin Morton was promoted to the head coach role, and was announced in the auditorium to a loud ovation by the football team.

“It’s been a grueling process trying to find the best coach,” CCHS Principal Ron Pinson said addressing the team. “I want you to win, and it takes everyone pointed in the right direction to win.”

Morton has been working closely with the players throughout the winter during the coaching search. Combined with the previous two years as the DC, Morton has the complete support of the Tiger players.

“I’ve built relationships with these players for almost three years, and we’re a tight knit group,” Morton said. “It starts with love, and I love these kids and want the best for them.”

Morton addressed the team by explaining his philosophies heading into the 2022 season. Morton coined the phrase “protect the stripes” in his introduction speech “to protect the standard we set at CCHS and for this football program.”

The stripes represent the stripes on a tiger, and the four Morton told the players to protect are; faith, family, the football program and yourself.

“I want the boys to know they are representing more than themselves,” Morton said. “The stripes are a reminder that we need to be the best representation of ourselves at all times.”

The weight room is the top offseason goal for the Tigers, and Morton has spearheaded the offseason weight program for CCHS the last few months.

Morton challenged the players to be leaders and wants to see that begin during the offseason programs. He also wants to see the Tigers “be a physical football team that is well conditioned, and dominate our opponents.”

Morton described his feelings as grateful and blessed for the opportunity, but he also has a businesslike mindset when it comes to new position.

“For the community, be ready,” Morton said. “This team is going to be a disciplined football team, and a team they will be very proud of and hang their hat on.”

Also, during the announcement, CCHS announced a new partnership with Birmingham based marketing company Pure Game Sports Network. Pure Game will work with the football program throughout the spring, summer and during the season to produce videos, pictures and other content for social media, including a schedule drop video in the coming months.