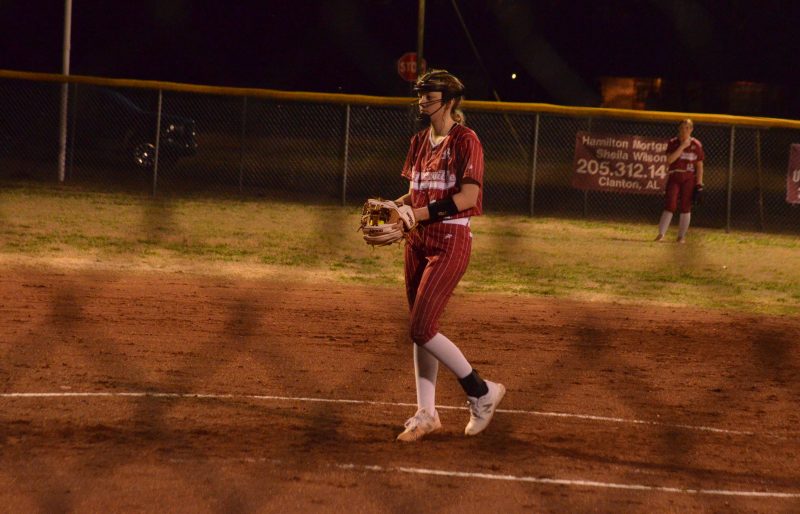 After losing three seniors to graduation last year, the Devils will rely on familiar faces in new places this season on the softball field.

“The girls played well tonight,” Maplesville head coach Clark Watley said. “We’ve asked three girls to step into new positions on the right side [of the field], and they did a good job.”

Maplesville had seven players register a hit, and junior pitcher Lexi Smith commanded the strike zone well over her seven innings and 105 pitches of work. Smith gave up eight hits and distributed her five earned runs in four different innings to minimize the damage.

Smith has been a fixture in the Devils varsity rotation since she was a seventh grader and threw a no-hitter her seventh grade season.

Smith added a 2-for-5 night at the plate with two singles and an RBI.

West Blocton opened the scoring in the top of the first inning after Smith walked two batters, and an RBI groundout scored the first Tiger run.

The Devils would erase the deficit in the home-half of the first when Laci Cook riffled a standup triple that scored the first two Maplesville runs. Avery Reed followed behind Cook with a single and she scored on a wild pitch later in the inning. Both Cook and Reed’s only hits in the game came in the first inning. The duo scored a combined three runs and earned two walks.

The Tigers got another run back in the top of the second inning.

In the home-half, two leadoff singles from Hannah Hollis and Jaden McGee set up Emilee Smith to drive them both in with a single. Smith was 2-for-4 with three RBIs and a walk. McGee and Hollis’ only hits came in the second inning.

A wild pitch later in the second stretched the Devils lead to 6-2 after two innings.

Then Lexi Smith hit her groove. West Blocton was sat down in order the next two innings, and meanwhile, Maplesville piled on four more runs to make it 10-2 after four innings.

Senior Jayla Nix went 2-for-3 with a single and a double with an RBI, and two runs scored.

“We’re loaded with juniors and seniors, and they’ve been with me for six years now,” Watley said. “It’s that consistent play, playing a faceless opponent, and whoever you play it’s just nine. The best nine wins usually.”

West Blocton got three runs back over the next three innings including a leadoff, solo home run to start the sixth inning. Lexi Smith responded by sitting down the next six batters in order.

After a solid game during the first quarter of the season, the attention to detail and their mindset is the biggest talking point in the Devils dugout.

“We just need to settle more, not being nervous,” Watley said. “Just execute, doing the little things and that is what I preach. If you do the little things right, you won’t have big things, that’s my philosophy.”

Maplesville will get the rest of the week off before hosting Billingsley on Feb. 28 at 4:30 p.m.