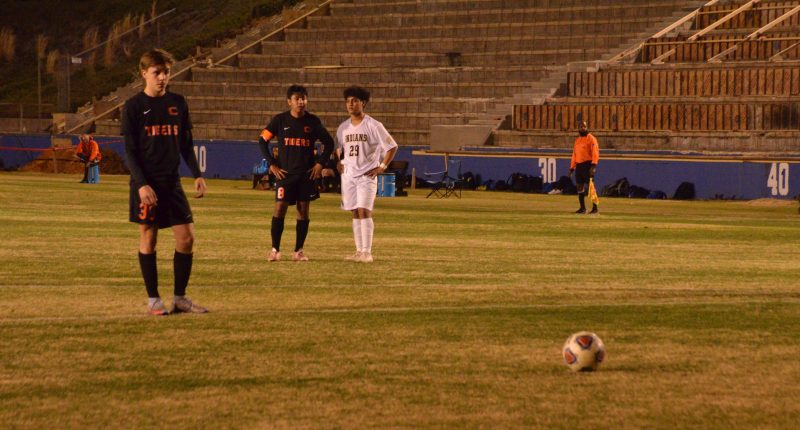 The Chilton County High School soccer teams played their second set of games in as many days taking on Wetumpka on Feb. 16. The boys earned a hard fought 1-1 draw and the girls played much better than they did on Tuesday, Feb. 15 but fell 3-1 to the Indians.

The boy’s game was a highly contested match that featured three yellow cards, two penalty kicks, numerous fouls, and there was no sign of tired legs from the Tigers.

CCHS controlled the first 10 minutes of the game but conceded a penalty kick in the 14th minute. Wetumpka’s Dawson Bouthillette converted from the spot to give the Indians a 1-0 lead.

CCHS (1-3-1) got its own penalty kick in the 33rd minute. Central midfielder Gentry Elmore converted his chance from the spot to send the game to halftime knotted at a goal apiece.

“We really competed hard tonight,” head coach Brandon Gurganus said. “The difference from [Tuesday’s] game was we did better at the technical things and possessed the ball for a while, overall it was night and day from [Tuesday].”

The second half was more of the same, fast-paced action from the first half. CCHS had numerous chances including a glancing header from Miguel Gomez in the 76th minute that rolled just inches wide of the post. The Tigers out shot and out possessed Wetumpka in the second half to earn the much-needed draw.

“I told them there is going to be a game where we do it the right way, and you’re going to see that it works,” Gurganus said. “I hope this was it because we did some really positive things tonight, and I’m proud of them.”

In the girl’s game, the Indians (1-2) jumped out to an early 2-0 lead beginning with Marlie Fuller converting in the 10th minute. Jewelina Holton doubled the lead eight minutes later. Wetumpka held a large portion of the possession in the first half in route to a 2-0 lead halftime.

“[At halftime], we just told them to keep doing what they were doing,” Chilton County head coach William Brooks said.

The Tigers (0-2) came out buzzing in the second half and earned a free kick just outside the 18-yard box three minutes into the half. The free kick bounced off the crossbar and directly into the path of Kendall Moore who punched in the first goal of the season for CCHS.

“I think when we scored it gave the girls confidence that we can do this, and she lifted them up,” Brooks said. “We’re an extremely young team, and I thought the girls played hard and we challenged them to compete after last night’s game and they responded.”

Tiger goalkeeper Abril Maza made a number of key saves including a 1-on-1 save with the attacker in the 42nd minute to preserve the 2-1 deficit.

However, Wetumpka broke through in 56th minute with Morgan Sims squeaking a roller past Maza that would push the Indians over the finish line for a 3-1 win.

Both Chilton County teams will get almost a week off before traveling to Marbury on Feb. 22. The girl’s game is scheduled for 5:00 p.m. and the boy’s game will follow after.