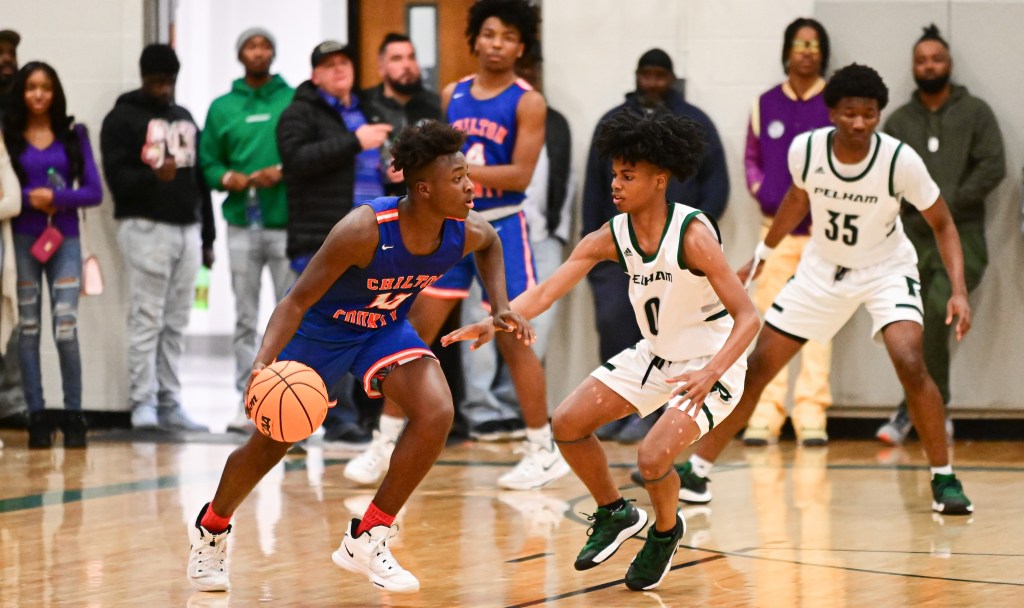 Pelham’s boys basketball team earned the area championship for the first time since the 2016-17 season on Feb. 11 thanks to a 19-point win against Chilton County High School. (JEREMY RAINES/ SPECIAL)

PELHAM – For the first time since the 2016-2017 basketball season, the Pelham Panthers have been crowned area champions.

Pelham took a tight five-point game at the half and ran away from the Tigers in the second half to pick up a 69-50 victory.

Three players finished in double figures, led by 29 points from MJ Jones, as the Panthers enter the sub-regional round of the playoffs with 10 consecutive wins.

Their last loss came to CCHS in the first of three area matchups between the two, but the Panthers have since responded with a 55-40 win against the Tigers and now a 69-50 win.

Early in the area championship game, however, Pelham struggled to create separation.

In the opening quarter, Jones came ready to play, but there wasn’t much scoring balance behind him.

He totaled eight points with a 3-pointer, an and-1 and a jumper, while Jordon Holloway added four points to help Pelham post a 12-point quarter.

The Panthers, however, did play consistent defense throughout the first three quarters of the game.

They allowed 11 points in each of the first two quarters, which allowed them to build a slight one-point advantage at the end of the opening quarter.

With a mirrored defensive effort in the second quarter, the Panthers started to get more players involved offensively.

In addition to six more from Jones, Kamari Hollis got his night started with five points, while Holloway and Jamal Miles each had two points.

That helped Pelham total 15 points in the quarter to extend the lead to five at the half.

More importantly, however, that quarter helped set the tone for a big offensive second half.

A team that likes to push the pace offensively finally started getting the breaks it needed in the third quarter, which led to the first of two 21-point quarters n a row.

The Panthers hit three from beyond the arc and had six players score in the period.

That, combined with the best defensive quarter of the game that saw them give up 10 points, helped the Panthers take control of the game with a 48-32 advantage heading to the final quarter.

Pelham followed that up with another 21 points in the final quarter to put to rest any hopes of a comeback for the Tigers, as Jones added 10 more points in addition to four each from Holllis and Holloway.

Jones finished with 29 points in the win and 65 combined in the area tournament. Hollis and Holloway also finished in double figures with 13 and 12 points, respectively.

Chilton County got 11 points from Latavion Floyd in the loss, while Jakobe Worthy and Jakeveon Bolding each added 10 points.