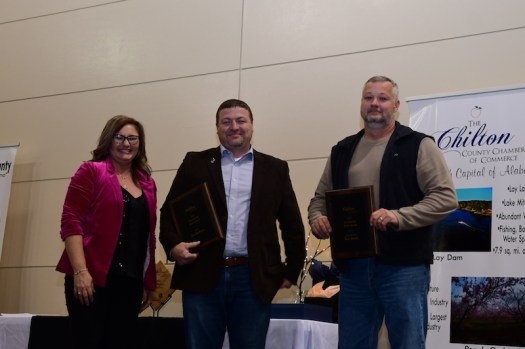 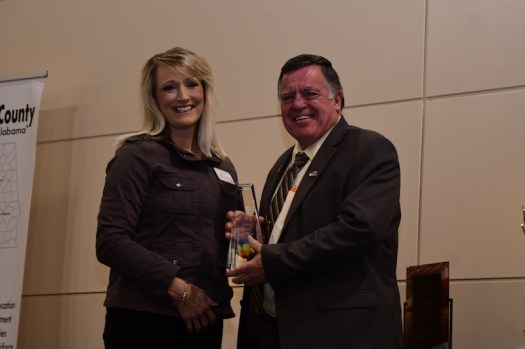 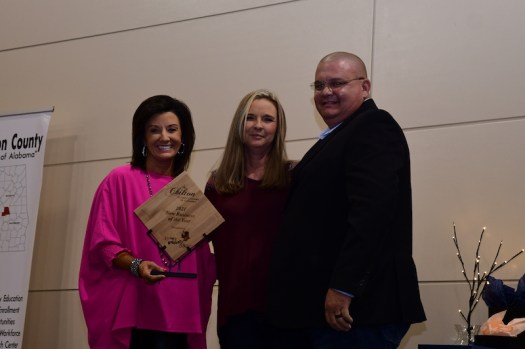 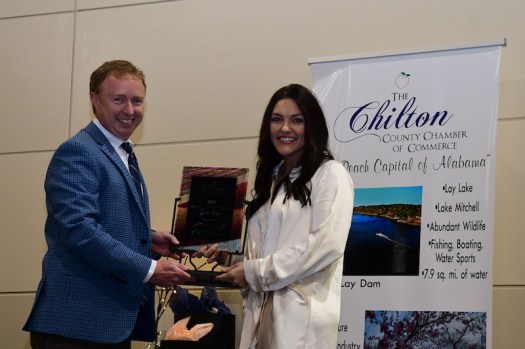 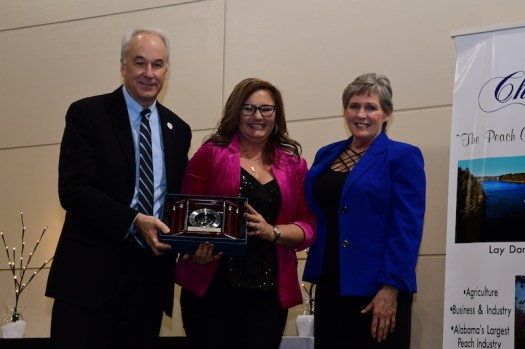 The Chilton County Chamber of Commerce members banquet was a night of celebrating those who contribute greatly to Chilton County, and the successes local businesses have had despite the coronavirus pandemic.

The first honor came as a surprise to the recipients as Clanton Police Chief Erick Smitherman and Assistant Chief David Clackley were presented the Community Spirit Award.

Chamber Executive Director Rachel Martin said the award is an opportunity to honor those who “recognize the importance of community … and the roles that we play in our community.”

“Thank you all very much,” Smitherman said. “We weren’t expecting it, but we appreciate it.”

Martin said the pair goes beyond the requirements of their jobs, including helping the Chamber set up for events and helped move the Chamber into its new office last year.

Clanton Mayor Jeff Mims was presented the Chamber Champion award. During the presentation, Adreane Barrington recounted working for Mims and his decision to run for mayor and close his business. His decision led to her starting her own business, which was possible in part because Mims helped her overcome her fears about the venture.

She said he has a positive vision for the city of Clanton and is already working to make it happen.

Mims thanked the Chamber for the award and said the first few weeks in office had been rough while getting up to speed, but other leaders in the community who were present at the banquet made taking office easier.

He said there were good things happening, and he was excited to be a part of them.

Bone’s Baskstreet BBQ, with locations in Clanton and Jemison, was honored as the New Business of the Year.

“Not only do they have a great business, but they are great people,” Adena Green said as she presented the award to Darrell and Nicole Bone.

Green said they support the community in many ways.

“It has been a very hard few years, but we survived,” Nicole Bone commented as she expressed their appreciation for the award.

Distinguished Business of the Year was presented to The Rhinehart Agency, which moved to Clanton in 2019.

“We are so honored to receive this award,” Torie Nix said on behalf of the company.

Billy Singleton was presented the Distinguished Citizen of the Year award. Singleton was the Chamber president for the past three years and serves on the Chilton County Airport Authority and the Clanton City Council.

Martin said he has been a mentor and friend to her as she stepped into the executive director role.

“When I doubted my experience and my qualifications for the position of the executive director of the Chilton Chamber, he encouraged me and I knew he was in my corner,” Martin said.

She said he always gives well thought out honest answers.

Singleton accepted the award with his wife Sylvia accompanying him onstage. He recounted how the community had welcomed them when moved to Chilton County several years ago.

“Sylvia and I made a promise to each other … that we would try to do something to repay the kindness that you showed us,” Billy Singleton said.

As Singleton’s time as president came to an end, Connie Bainbridge was presented as the new Chamber president for this year.