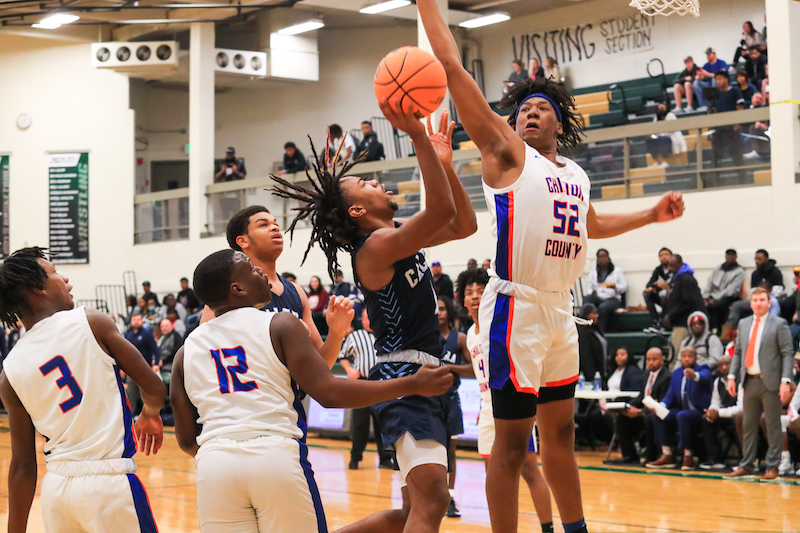 Chilton County High School varsity boys advanced to the sub-regional round of the playoffs narrowly escaping Calera 56-50 to move on to the area tournament championship game.

The Tigers edged out Calera behind a game-high 19 points from junior guard Jakobe Worthy and the help of 11 offensive rebounds in the game.

“[Jakobe] has been on an offensive tear lately, and we’ve put him in different places we usually don’t on offense,” Chilton County head coach Austin Moncus said. “He has blossomed in those areas, and we’ve put in more sets for him to get open looks at the rim.”

Pelham beat Helena 61-43 in the other 6A Area 6 semifinal to set up the third meeting between the area rivals this season on Friday at 7:30 p.m. at Pelham High School. Chilton County bested Pelham 70-61 on Jan. 11 at home but dropped its road matchup 10 days later 55-40 to the Panthers.

“We are looking forward to the opportunity, and it is a good measuring stick for us,” Moncus said. “They’re a great team, but I think we have a good game plan for them and hopefully we can execute that and put ourselves in position to be successful.”

The Billingsley Bears played Autaugaville in the 1A Area 7 semifinals in the only other area high school varsity boys action on Wednesday. The Bears were throttled 91-20 by the defending 1A state champions, setting up a matchup with the Maplesville Red Devils on Friday at 6:30 p.m. at Autaugaville High School.

In varsity girls play on Wednesday, Maplesville tried to join Billingsley in the girls 1A Area 6 final but fell 64-13 to Autaugaville. Billingsley and Autaugaville will face off at 5 p.m. on Friday prior to the boys’ area final.

The Isabella High School varsity girls will get the first chance to bring home an area tournament championship on Thursday at 5 p.m. taking on Francis Marion High School.