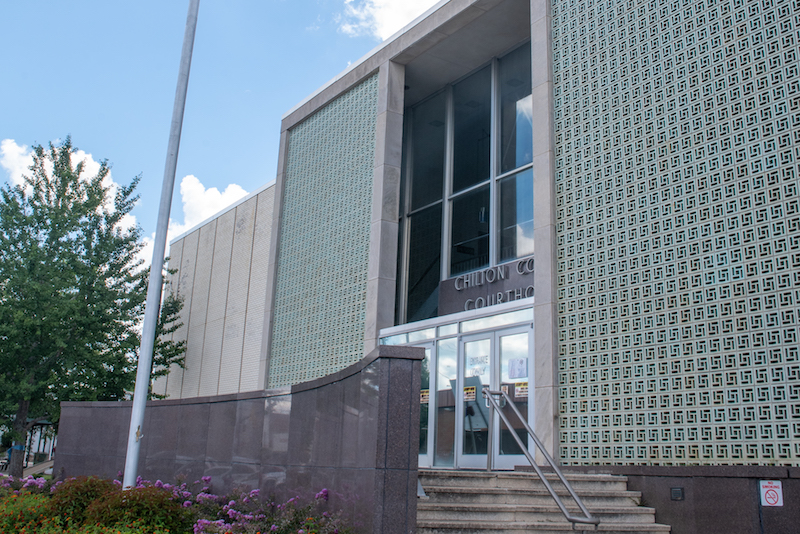 Discussion of relocating the Chilton County Courthouse have reached the action stage as property is being considered. (FILE)

The Chilton County Commission took the first step toward a new courthouse building on Feb. 9 when it approved entering negotiations for the Town Mart property on Highway 31 in Clanton.

Williams expressed concern that purchasing this property, while also paying on property for future industrial development at Exit 200, would put the county in an unhealthy debt situation.

“Our debt is going to exceed our income, I’m afraid, if we don’t prioritize where we are spending money,” Williams said. “Our courthouse should be priority.”

County Administrator Sylvia Singleton confirmed during the meeting that the commission had the financial position to be able to do both projects.

She said the purchase of the Exit 200 property is already in the budget to come out of the industrial development fund. Purchasing the Town Mart property would come out of the general fund, which Singleton explained would be funds left over from previous years.

“The county does not have a lot of debt,” Hardee said.

Headley said he was opposed to moving the courthouse.

“The discussions have mainly involved us putting up refundable earnest money with a 90-day due diligence period to look at the building, have it assessed by some experts, architects, mechanical engineers, those kinds of things to see if the property is suitable and adaptable for your courthouse,” Bates said. “We don’t know that. The owner wanted a contract in hand before they would let us go poking around in their building.”

A motion to authorize Hardee to negotiate the contract “with earnest money and a due diligence period of 90 days” was approved.

If the property was deemed unsuitable for the project, the commission would get its money back.

“The price that has been asked is $2.5 million, so you wouldn’t want to exceed that,” Bates said.

Property continued to be a focus as Hardee gave an update of a visit to the Exit 200 property that he and Parnell made. Hardee said he has also been attending training on economic development, which highlighted the importance of owning the property in order for that exit to be developed.

“It is feasible to develop for industry,” Hardee said.

A site study and a soil sample study have also been done on the site.

“I am asking to go ahead and buy this property out right,” Hardee said.

A motion was passed to complete the purchase of the property, which the county has already been paying on. Five payments of $20,000 have been paid on the option to purchase. Purchasing the property will be an additional $750,000.

Williams was the lone vote against.

Parnell said the property was hilly and wet, but it was not a swamp. He said some mitigation may be needed to develop the land.

Kelley asked if there was a guarantee that an industry would locate. Hardee said there had been businesses that expressed interest in locating there.

“You are not going to get industry to come, if you don’t have property,” Kelley said. “… You have got to have some kind of incentive.”

Both Kelley and Hardee said the county had lost business/ industry in the past because the county was unwilling to offer anything.