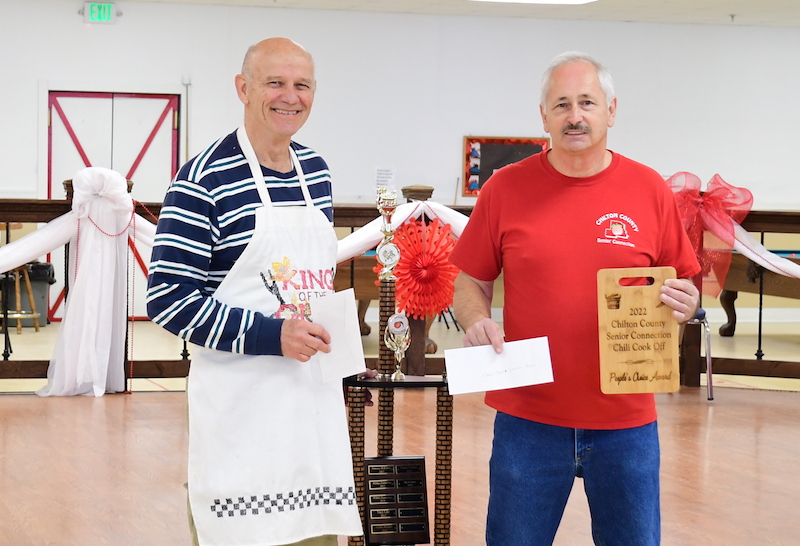 Senior Connection named the next winner in a line of talented local chili cooks on Feb. 5.

The judges chose Gordon Swenson for the top prize, but the People’s Choice award went to Howard Lewis.

The win came as a surprise for Swenson.

Swenson said this was his third year participating in the event, but his first year to win.

“I tweaked my recipe a little bit,” Swenson said of what he did differently this year. “I try to make it, so it is just hot enough so you taste it going down. It doesn’t burn your lips.”

Swenson uses beef and Conecuh sausage as the protein.

“I try not to put in too many spices, so that it doesn’t end up as muddy spice,” Swenson said.

He said he enjoys meeting people at the event, and the camaraderie among competitors.

In addition to being the audience favorite, Lewis also placed second in the judged portion.

He has competed in the event for two years.

Lewis enjoys the competition, and the opportunity for bragging rights.

“I have judged this thing for three years now, and this is without question the closest vote we have ever had,” guest judge J.R. Tidwell, who returned as a judge this year even though he lives in Athens now, said. “Among the entrants, this is the highest overall score that we have had in these three years. The chili today … was excellent.”

Swenson had 151 points from the judges, just two points higher than Lewis.

“There was only a four-point difference from number three to number one,” Tidwell said.

Senior Connection director Vanessa McKinney thanked all of those who participated in the chili cook-off and the health fair.