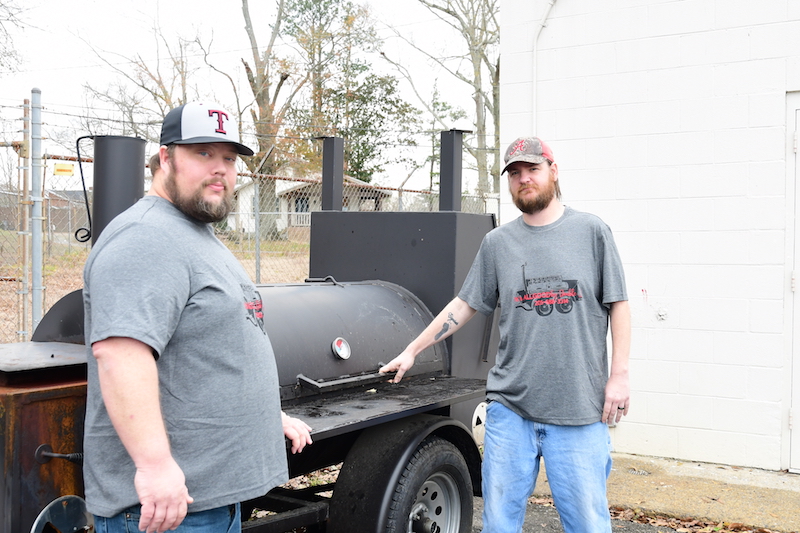 Texas and Alabama influences merge at It’s Allgood By Double J in Thorsby.

“My granddad taught me, and we’re from Texas,” Joseph Allgood said. “My grandfather won two state titles … there.”

He barbecues the same way his grandfather did, which is long, slow and smoked.

Josh Moncrief is from here in Alabama and learned the art of barbecue from his father.

He said the two styles do have some similarities, and customers have enjoyed the combinations.

“I think the old timers knew what they were doing, and we leave it that way,” Allgood said.

However, the desire to open a barbecue restaurant together started when they were 12 years old attending Thorsby High School together.

The restaurant opened in November and is to-go and catering only for now with plans to add a dine-in option in the future.

“We worked on it for a year before we set it up,” Allgood said.

Doing a food truck was an initial idea, and may be something added in the future.

They are open Monday, Wednesday and Friday with specific menus each day. Menus are available the day before on the company’s Facebook page. Response has been good.

With his Texas roots, brisket is Allgood’s favorite thing on the menu and one of his specialties.

A good example of the cooks’ collaboration is their macaroni and cheese, which is Moncrief’s recipe with some tweaks by Allgood.

“There is no other mac and cheese like it around here,” Moncrief said.

He said one of the eatery’s most popular menu items is the loaded grilled cheese, which is a sourdough bread sandwich of macaroni and cheese, pulled pork with barbecue sauce and garlic spread.

Ribs, pulled pork, fajitas, street tacos and Brunswick stew are other menu items that highlight the home states of the business partners.