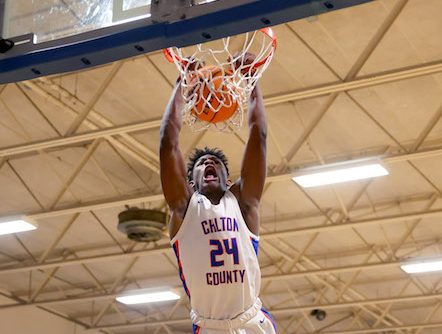 Demarcus Riddick with a monster dunk over a Helena defender. (PHOTOS BY BRANDON SUMRALL/ SPECIAL) 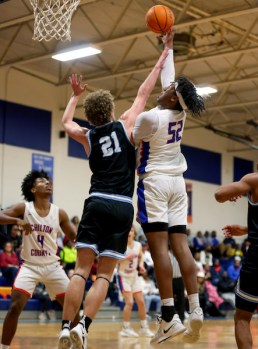 Latavion Floyd puts up a hook shot over a Helena defender. 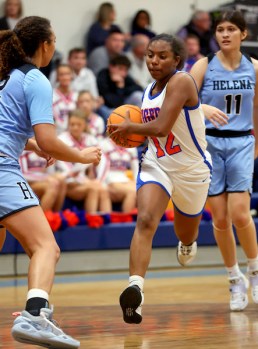 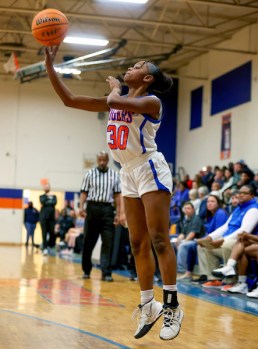 A big-time area matchup between Helena High School and Chilton County High School on Jan. 28 resulted in a split as the Lady Huskies knocked off the Lady Tigers 49-33 while the Tigers varsity boys picked up a big 58-56 win over Helena.

The first period of varsity girls action saw the Lady Tigers give the Huskies all they could want, and then some as Tyonna Booker, Iasia Anderson, and Tyeshia Williams combined on an early 6-0 CCHS run. Olivia Johnigan put an end to the run, but with a three from Iasia Anderson, the Tigers would take an early 9-1 lead. The lead dissolved quickly however as a basket from Alana Scott began a 10-2 Helena run to close out the half as the first came to an end in a 11-all tie.

The Husky run continued into the second with six straight by the visiting Huskies. Williams put an end to the run, but the solo basket did little as the Helena run continued to 11-1 to give the Huskies a 22-12 lead. Another pair of baskets by both squads sent the game to the halftime break with Helena leading 24-14.

The 10-point Helena lead remained intact deep into the third period of play where five straight from Booker cut the lead to six, but was answered with a basket from Johnigan that sent the game to the final period of play with the Lady Tigers trailing 38-29.

A three-point play by Johnigan early in the fourth pushed the lead to 12 while she would later add another to make it a 14-point Helena lead. Another basket from Johnigan, along with a free throw from Kennedi Moody with just seconds remaining, brought the game to its final score of 49-33 in favor of the Huskies.

A packed student section in “Monks Madhouse” surely fired up the Chilton County Varsity Boys basketball team as the Tigers began varsity boys action firing on all cylinders. Jamon DeJarnett and Jakobe Worthy combined to rain in three consecutive three pointers while the addition of a basket from Demarcus Riddick propelled Chilton through a 10-0 run to start the contest. Ethan Acosta brought an end to the Tiger run, but it would be Chilton County that ended the first with a big 17-9 lead.

Another three from Worthy to start the second sent the Tigers out in front by 11 while yet another three later from BJ Davis made it a 12-point CCHS lead. With 5:05 remaining in the first half, a basket from Joshua Williams began an 8-0 Helena run that would pull the Huskies to within four. Jakeveon Bolding put an end to the Helena run but as time expired on the first half, the Huskies had pulled to within three, 24-21.

An early basket to start the third by Williams cut the lead to one. Later, it was Williams that added a three to make it a 34-all game with 3:08 remaining in the period. Owen Davis followed with another three for Helena to give the Huskies their first lead of the game with Davis adding a late basket that gave Helena a 43-39 lead as the game moved to the final period of play.

A three from Ian Johnson early in the fourth put Helena up six while baskets from Williams, Satterfield, and Washington made it an 11-point Husky lead with just two minutes remaining. Eight seconds later the Tiger rally was underway with a three from Worthy. Another three later from Bolding cut the lead to four while a pair from the line by Riddick made it a two-point game. With just 18 seconds showing on the clock, a monstrous dunk by Riddick tied the game at two while sending “Monks Madhouse” into a frenzy. A Tiger steal on the inbound sent Bolding to the line where a solo free throw put the Tigers up one. Another Helena turnover sent Davis to the line where another free throw followed by another Husky turnover sealed the deal for CCHS as the Tigers pulled off a thrilling 58-56 victory.

Davis, Worthy, Bolding, and DeJarnett all finished with double digit points for the Tigers while Williams and Johnigan each put up 18 for the Huskies.