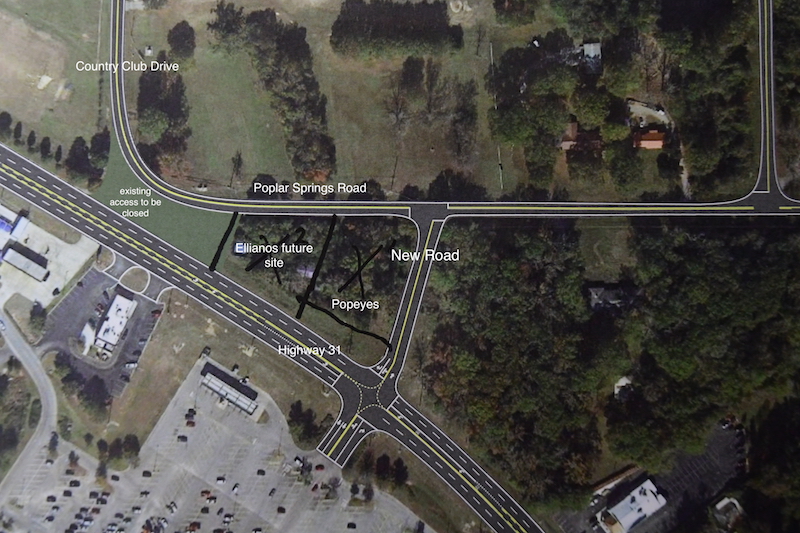 This is a drawing of how Country Club Road and Poplar Springs Road will be aligned and the new road to be constructed. (CITY OF CLANTON | CONTRIBUTED)

The city of Clanton has been awarded $685,583 from the Alabama Transportation Rehabilitation and Improvement Program-II funding to realign how Country Club Road and Poplar Springs Road connect to Highway 31.

The project will close current access from Country Club Drive onto Highway 31 and the nearby access from Poplar Springs Road. Having the roads connect with Highway 31 so close to each other has created issues, and there have been several accidents in the area.

A new road from Highway 31 to Poplar Springs Road will be built from the intersection with the traffic light near Popeyes.

Mayor Jeff Mims said it meant a lot for the application for funds to be approved because the program is very competitive.

According to a press release from the Office of Gov. Kay Ivey, 32 projects were approved for ATRIP-II funding this year.

Funds for the ATRIP-II program come from the portion of Rebuild Alabama Act gas tax earmarked for local projects connected to highways.

“While our work is far from over, we have made significant progress in improving our roads and bridges thanks to Rebuild Alabama,” Ivey said in the release. “During my state of the state address, I shared that on top of local improvements, the state has administered projects in almost all 67 counties, and I am thrilled to be announcing additional awards today. I look forward to continue putting every single penny of these funds to good use for the people of Alabama.”

Mims said this was a project he began discussing with the state soon after he took office.

“When I mentioned it to the state the first time, they thought it was the best idea ever,” Mims said. “Because of the accidents and where it is at down there.”

An additional $116,022 in local funding will be required to complete the project, bringing the total cost to $801,605. A piece of property will need to be purchased to complete the road. A portion of it, which grants access from Highway 31 to Popeyes, is already complete with marked turn lanes.

Architectural drawings for the project have been completed, but a timeline for construction is still being developed. City leadership will be attending a meeting on the requirements of moving forward.

“It will be a slow process to get everything together,” Mims said.

The project will also alleviate some of the traffic issues during school dismissal and after football games, Mims said.

The mayor said there are other intersections in the city that have similar issues that will need to be addressed in the future.

The current plan is to apply for funding to make improvements to Temple Road access to Highway 31 next year.