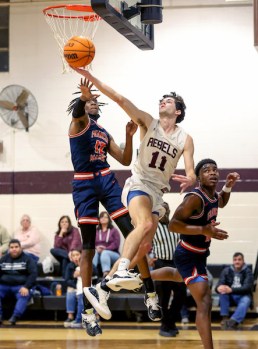 Thorsby's Brody Mims drives to the basket for a layup. (BRANDON SUMRALL | ADVERTISER) 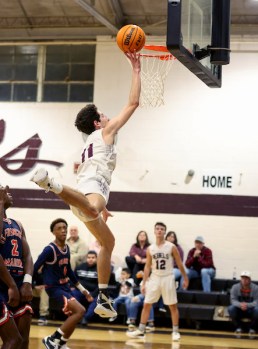 Thorsby's Brody Mims drives to the basket for a layup. 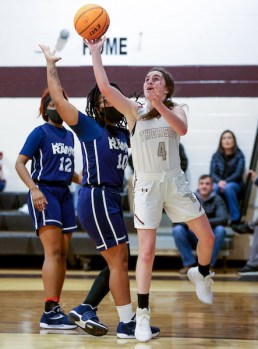 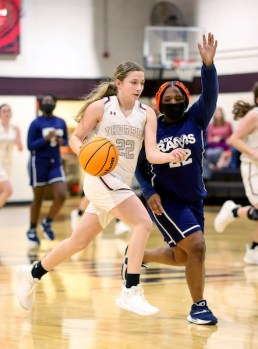 Thorsby's Brooklyn Reeser drives to the basket against a Francis Marion defender.

A Jan. 18 area matchup resulted in a split for Thorsby High School.

The Lady Rebels were defeated by the visiting Francis Marion Rams 58-42 while the Rebels varsity boys picked up a 55-41 win at home.

The first period of varsity girls action saw a young Lady Rebels squad give the visiting Rams all they could muster during the early moments as Thorsby traded basket for basket with the visitors. A basket from Cameron Lockhart drew Thorsby to within one midway through the period, but a basket from Le’naya Essex for Francis Marion kicked off a 7-0 Rams lead to end the period while giving the visitors a 14-6 lead after one period of play.

The Rams lead grew to 15 late in the second quarter before a basket from Makinley Turner and Brinley Giambrone pulled Thorsby back to within 12. Essex would answer with a basket from the Rams however that would send the game to the halftime break with Francis Marion leading 27-13.

A three from Turner early in the final period made it a 10-point game while another basket from Reeser pulled Thorsby to within eight. Another from Reeser later in the period drew the Lady Rebels to within six with just over three minutes remaining, however that was the closest the Rebels got as the Rams opened up the deficit down the stretch on their way to a 58-42 victory.

Varsity boys action was a low scoring affair through the first period as Tayshun Essex and Chrishawn King combined to put Thorsby in an early 5-0 deficit. Kohen and Luke Davis combined to cut the lead to one while Brody Mims gave Thorsby their first lead of the game. The one-point lead would swing back in favor of the Rams, then to the Rebels, and back to the Rams as Francis Marion ended the first with a 9-8 lead.

A three from Mims to start period number two put Thorsby out in front, but the score remained tight through a 15 all tie where another basket from Mims kicked off a 13-0 Thorsby run. Jayden Tubbs eventually ended the run for the Rams while starting a run for the visiting team as Francis Marion pulled to within eight before the first half buzzer with Thorsby going to the halftime break leading 32-24.

The Rams cut the lead to six early in the third but with baskets from Davis and Nathaniel Thomas, the Rebels pushed back out in front by 10. Four straight from Davis along with another from Turner gave Thorsby a 16-point lead as the game moved to its final period of play with the Rebels leading 44-28.

Davenport and Davis combined to make it a 20-point game early in the fourth but would see an 8-0 run by the Rams cut the lead to 12 at the halfway mark of the period. Five by Mims put Thorsby back out in front by seventeen while a late pair of baskets drew the Rams to within fourteen as the final horn blew and sealed a 55-41 victory for Thorsby.