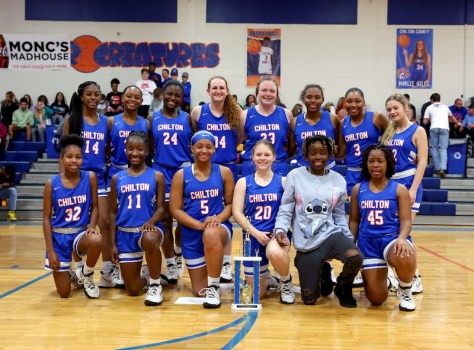 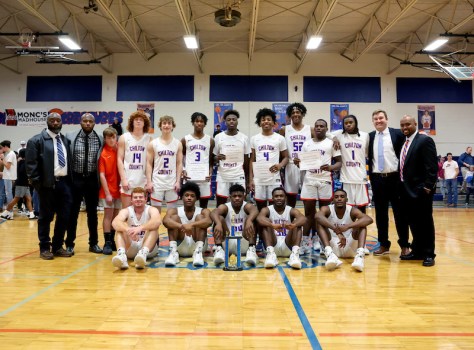 This year’s County Basketball Tournament came to its conclusion on Jan. 8 in Orange and Blue fashion as Chilton County High School made a clean sweep of the tournament. The Tigers B-Team picked up a 44-33 victory in Friday night’s final over Thorsb, while the varsity girls knocked off the Isabella Mustangs in a 57-55 thriller and  the varsity boys defeating the Jemison Panthers 64-44.

Varsity girls action saw the Lady Tigers jump out to an early lead thanks to six from Marlie Giles to lead CCHS through an early 11-1 run. Makayla Logan put an end to the Tiger run with a basket for Isabella while baskets from Mallie Harrison and Alyssa Zeigler pushed CCHS back out in front by 12. With baskets from Logan and Amelia Fjeldstad, the Mustangs cut into the Tiger lead late in the first, but the Tigers ended the first with a 17-10 lead.

The start of the second period saw the Mustangs mount a comeback as six points from Sadie Simon drew Isabella to within three midway through the period. A basket from Marlie Giles with 2:36 remaining in the period sent the Tigers on a 7-0 run that would eventually end on a basket from Gracie Fjeldstad. CCHS ended the first half with a 32-23 lead.

The comeback the Mustangs started in the second period was back in full force in the third with Deasia Wilson getting things started for Isabella. Simon and Amelia Fjeldstad followed with baskets for the Mustangs that cut the Tiger lead to three while a basket from Williams pushed the Tigers back out in front by five. A three from Amelia later cut the lead to three while a second from the Mustangs point guard made it a 36-all game with 2:27 to play in the third. A back and forth battle to end the period sent the game to its final period of play with the score tied at 41.

Giles and Williams gave the Tigers a four-point lead early in the fourth while three from, Wilson would make it a one point game. Williams later made it a four-point game but a quick answer from Simon again cut the Tiger lead to one. Three from Williams at the charity stripe again pushed CCHS up by four with 1:37 to play. Simon cut the lead to three with 1:25 remaining while a free throw from Amelia with 0:18 to play made it a two point game. The two-point deficit however was the closest the Mustangs would get as the Tigers would escape with a 57-55 victory and the title of Tournament Champion.

The first period of varsity boys action saw the Panthers jump out to an early lead as Hayden Robinson and Tucker Bean gave Jemison an early 5-0 lead. Latavion Floyd put an end to the Jemison run while he and BJ Davis combined to swing the lead in favor of the Tigers, 8-7. A free throw from Bean made it an 8-all tie, but baskets from Jakeveon Bolding and Jamon DeJarnett pushed the Tigers out in front by four. Another late basket from Bean brought the first period to a close with the Tigers leading 12-10.

The second period of play proved to be the Panthers downfall as a pair of early free throws from Bolding sent the Tigers on a 8-0 run to make it a 20-10 game. The CCHS run would end on a three from Tyriq Archie while another three from Harrison Hilyer and a second from Archie would later cut the lead to six. A basket from Demarcus Riddick would push the Tigers out in front by eight while kicking off a 7-0 CCHS run to give Chilton a 16-point lead at the half, 39-23.

A basket from Bean cut the lead to fourteen early in the third while DeJarnett answered to again push the Tiger lead to sixteen. A basket from Davis made it an 18-point lead while the addition of a basket from Bolding would send the game to its final period of play with CCHS leading by twenty, 53-33.