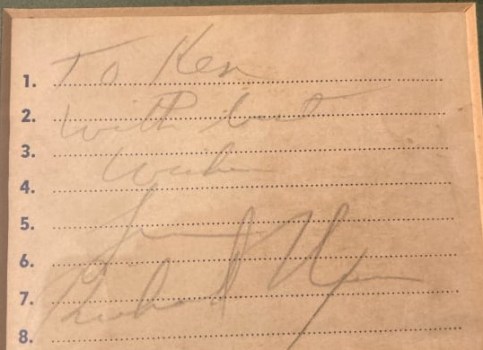 This scorecard features the message “To Ken, With Best Wishes, From Richard Nixon.” Ken Snow also has one signed by President Dwight Eisenhower. (Contributed) 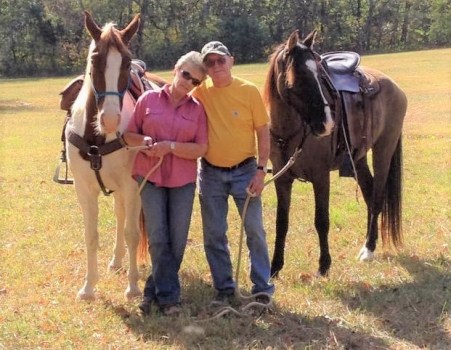 Ken Snow with wife, Linda and their horses. (Contributed)

For many American patriots, the act of voting seems like a sufficient annual civil duty. However, Clanton resident, Ken Snow has a lifetime of civil service memories with the United States. Born in Birmingham, and the son of Navy sailor, Snow and his family moved around the United States as many military families do. At age 14, while living in Rockville, Maryland, he worked as a golf caddy at Burning Tree Country Club. Burning Tree has a golf course located 11 miles north of the White House in Washington D.C. Snow had the opportunity to meet congressmen and government officials there, including caddying for President Dwight Eisenhower and Vice President Richard Nixon.

“It was easy to caddy for them because of the secret service,” said Snow. “If their ball went into the tree line, there were Secret Service men that were hiding in the trees and would point out where the ball was located. They also carried their own golf bags, which had weapons in them, instead of golf clubs.”

“President Eisenhower was special,” Snow said. “He had commanded the old troops in Europe (during World War II) and was well-respected. He was kind to everyone. Older people have so many adventures and stories to share if young people would listen to them.”

Snow also recalls that former President Nixon was not a high-level golfer.

“He would frequently shoot over 100,” Snow said. (A golfer considers 70 to be a good game.) “On this particular day, he shot a 99. He was so pleased about being under 100 that he tipped me an extra dollar.”

After their golfing game, Snow and his fellow caddy Harris were offered a ride home by Eisenhower and the Secret Service.

“He asked which way we were headed home,” Snow said. “We lived in the opposite direction of the White House, and I was afraid they would not give us a ride if they had to go out of their way. So, we rode into Washington D.C. with them and when we were at Georgia Avenue (a neighborhood that I had lived in before) I said, ‘this will be good right here.’”

Snow and his friend Harris took a bus back to Rockville where they called their parents, and told them the exciting story about riding with the president.

After his teen years, Snow went to Auburn University, followed by becoming a United States Marine Officer (1961-1968) where he served as a fighter pilot for 120 missions during the Vietnam War. Afterward, he went to law school and became the first District Judge of Marengo County.  He retired in 2000. After looking for “wide-open, rolling hills” for their horses, Ken and his wife Linda moved to Chilton County (Linda’s native county) in 2010 where they care for their six horses.