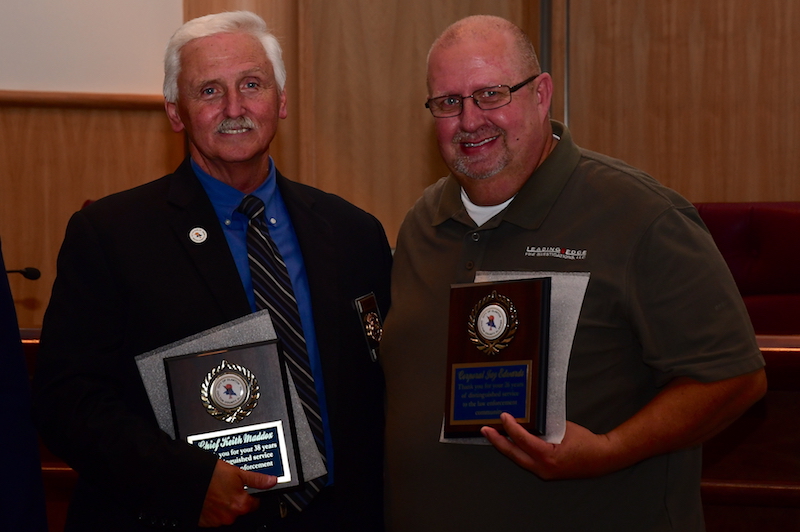 Clanton police officers Keith Maddox and Jay Edwards were recognized for their years of service on Dec. 29. (JOYANNA LOVE | ADVERTISER)

Clanton honored retiring police officers Keith Maddox and Jay Edwards for their decades of service to law enforcement during a ceremony on Dec. 29.

Maddox served with the Clanton Police Department for 38 years, while Jay Edwards served with multiple departments, eight of which were full-time with CPD to accumulate his 27 years of law enforcement experience.

Maddox said it was his brothers who encouraged him to join law enforcement.

“I have been around so many officers over the years,” Maddox said. “It has just been amazing to have contact with so many wonderful people. … You truly are the peacekeepers. You don’t know how much that you do sometimes on the streets in particular. I don’t know what society would do without you … I am just so thankful for all of you.”

Edwards thanked everyone who had served with him for looking out for him.

“Trust me though, the guys and ladies that are working now, they are the real heroes because it is not like it was when I started,” he said.

Several of those that had worked alongside Maddox and Edwards spoke of their dedication and integrity.

Smitherman had served under Maddox as chief from 2013 until Smitherman was named chief.

C.J. Robinson, chief deputy district attorney for the 19th Judicial Circuit, recounted when he first met Maddox and how he helped him navigate his first few cases in Chilton County 15 years ago.

“The kindness and the courtesy that you took time to walk me through (it) — I have always remembered that, and I have tried to do that same thing,” Robinson said.

Later, Maddox responded by saying Robinson “has helped me more than I ever helped him.”

Robinson also thanked Edwards for his patience when he was new.

CPD Assistant Police Chief David Clackley recounted how Edwards had taught him a lot about arson investigation and his early days working with Maddox. He expressed appreciation for them both and wished them good thing in retirement.

“I have learned a lot from you,” Clackley said.

Chilton County Sheriff John Shearon also recounted stories and expressed appreciation for assistance from Edwards and Maddox through the years.

“These two men right here have had their hand on my career,” Shearon said.

“Keith, I’ve probably never met anyone as humble as you,” Woods said.

Singleton said while they were happy for the retirees, it was a bittersweet moment.

“You are the reason that people like me can sleep peacefully at night,” Singleton said. “There is no way that we can adequately express our appreciation.”

The recognition ended with refreshments and other attendees expressing personal congratulations to the retirees.