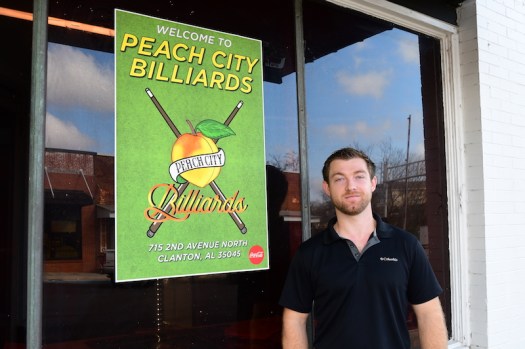 Peach City Billiards co-owner Austin Dennis of Clanton has enjoyed the game of pool since he was in college. (JOYANNA LOVE | ADVERTISER) 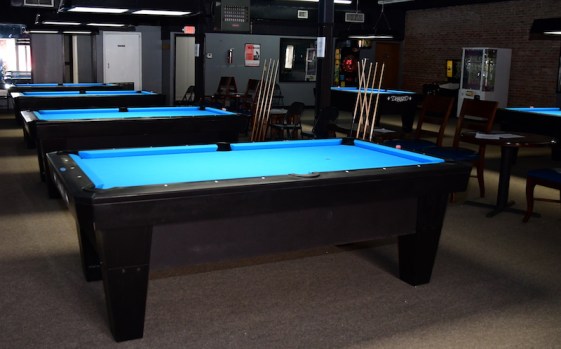 “I have been playing pool pretty much non-stop since 2017,” Dennis said.

He started playing in college and then joined the Amateur Pool Association averaging two tournaments a month.

“I had always played team sports and this is the first thing that I have ever done that is sort of an individual sport … I like that the only thing stopping you from getting better is how much time you are willing to put in,” Dennis said.

Peach City Billiards co-owner Matthew Fountain has previous experience as a billiards business owner in Pelham. Fountain asked Dennis to be a part of his new business venture in downtown Clanton.

“He found this building, and he brought me in here and showed it to me,” Dennis said. “I was all in ever since he showed me the place.”

Dennis liked being able to locate in an older building.

The location was also a good fit.

“It has worked out great,” Dennis said. “I love the location right here on Second Avenue, being right down the road from The Bearded Peach. We send people to them, and they send people to us all the time.”

There are several pool tables with some seating near each for those waiting on their turn at the table.

A snack bar near the entrance offers a variety of sweet and salty options as well as water and soda choices for purchase.

The business hopes to eventually expand food options to include hearty snacks, such as chicken fingers and fries.

After a soft opening on Dec. 6, a grand opening event is being planned for some time in January.

“We have had a lot of new people come in, and they are starting to get into it (pool) since we opened up,” Dennis said.

The business is open to all ages.

There is also the potential for lessons to be offered in the future.

Tournaments are held on Tuesdays and Saturdays beginning at 7 p.m. Signups start at 6 p.m. At other times, play is a set rate per person per hour.

Having separate tournaments for younger pool players under 18 is also being discussed.

Dennis hopes to have an Amateur Pool Association League on Sundays also. Details are being worked out and updates will be shared via the Peach City Billiards Facebook page.

Dennis said it takes 30 players to have a league.