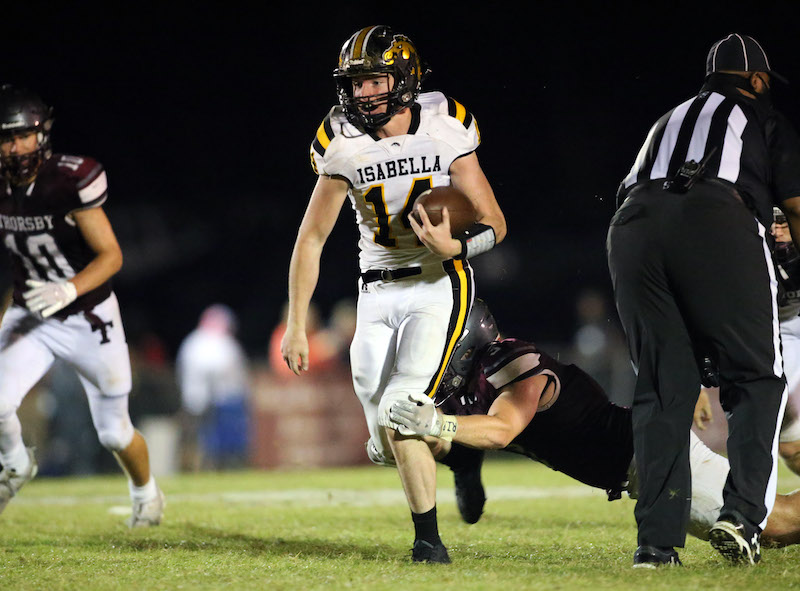 Isabella running back Zac Chapman played a sensational game against Thorsby High School on Sept. 10. Chapman gained 264 yards off 28 carries in the game while adding a touchdown. (BRANDON SUMRALL/ SPECIAL)

Isabella High School’s football team had another successful season in 2021, winning the regional championship for the third year in a row and making it to the second round of the playoffs.

Running back Zac Chapman was a key player in the team’s success.

His determination was seen on the field as he worked to lead his team to victory.

“Everybody knows that when we played, he was the difference in the game — he’s a game changer,” head coach Tate Leonard said. “He makes things happen whenever we get him the ball.”

Chapman had 1,255 rushing yards for the season with 17 touchdowns. Against Highland Home this season, the score was close, but Chapman was able to make “some big time runs to win that game” in overtime, Leonard said.

Leonard has seen Chapman’s consistency for excellence, having been his coach for five years.

“He has been the same player ever since we had him,” Leonard said. “He is a hard worker, and he is determined.”

Chapman is also known for working well with the other players to build the team dynamics.

“His team mates look up to him,” Leonard said. “Whenever things aren’t going good, he usually finds a way to make it work. The offensive line did a great job for him this year, too.”