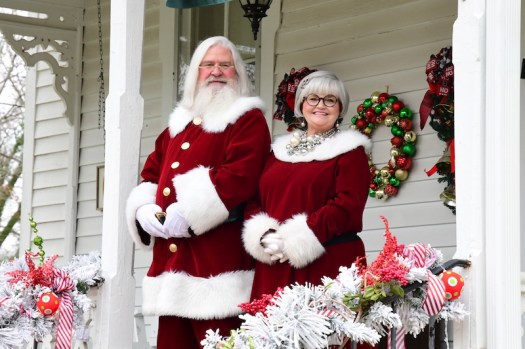 Santa and Mrs. Claus, known to adults as David and Melissa Calton, on their porch in Verbena. (JOYANNA LOVE| ADVERTISER) 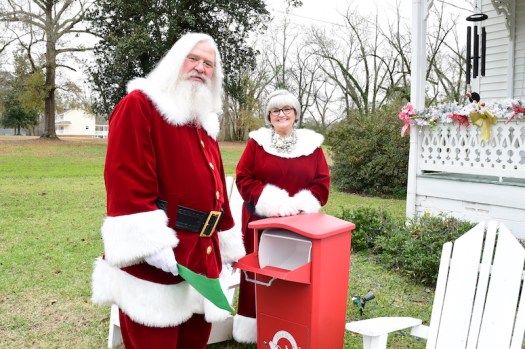 David Calton as Santa holds a letter to Santa from the special mailbox with Melissa Calton as Mrs. Claus. (JOYANNA LOVE| ADVERTISER)

Santa and Mrs. Claus spent the Christmas season in Verbena this year.

Those driving by likely saw them waving to passersby from the porch of what had been the Verbena Methodist Church’s parsonage.

A special mailbox out front has allowed local children to get their letters to Santa.

Better known to adults as David and Melissa Calton, the couple moved to Verbena in November bringing their desire to spread Christmas cheer with them.

“It’s just magic, and we love it,” Melissa Calton said.

Living on the bus route for Verbena Annex has given them the opportunity to wave to young students and meet some of them.

“We had a school bus stop by,” David Calton said.

The bus driver had asked the couple a few days in advance if it would be all right to stop at the house with the students.

Students had the opportunity to put a letter in the Santa mailbox, and the couple took time to talk to them.

David Calton said many of the neighbors have also asked if they can stop as they drive by.

News of his Santa persona has spread as people have seen him getting in the car to go to an event and taken a picture or asked if he would come to their event.

The couple’s house keeps a subtle Santa theme throughout the year.

“We live it,” Melissa Calton said.

Their vast assortment of Santa collectibles, dishes and decor is the result of years of receiving gifts and finding things they liked.

The persona of the Claus couple started seven years ago for the Caltons.

“I am a retired children’s minister,” Melissa Calton said. “I have been 35 years in ministry, and we started because we had so many autistic children and families that could not go to the mall and sit.”

To make it easier for these children with special needs, the couple would go to the child’s house or invite them over to give them a chance to see Santa.

“That is out heart that all children feel loved,” Melissa Calton said.

David Calton said he remembers one girl with autism had her first ever picture with Santa Claus with him when she was 12 years old.

“Santa Claus as several different outfits,” Melissa Calton said. “He could be a cobbler working in his workshop, or he can dress up like in a suit. It has been fun. We have thoroughly enjoyed it.”

David Calton has a few different styles of suits to choose from as well.

Photos of some the children that have had pictures taken with them hang on the wall. Some are scared at first, but Santa is patient.

The couple has been able to watch some of these children as they grew up.

Sometimes when a child can visit the couple’s home, chocolate chip cookies and chocolate milk are served from special dishes.

The couple is sensitive to each child’s comfort level.

“Of course, being Christian, we always share the real reason for the season with the colors of his suit,” Melissa Calton said. “The black for the sin and the red for Christ’s blood and the white for purity.”

David and Melissa Calton grew up in the same town in rural Louisiana, and they have known each other since they were in early elementary grades.

“He was my first date,” Melissa Calton said.

It was David Calton’s long career with AT&T that moved the family to Alabama several years ago. Melissa Calton said Verbena reminds her of where she grew up.

The couple has enjoyed getting to know their new neighbors this holiday season.