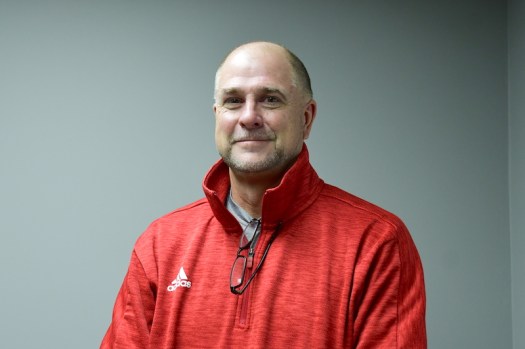 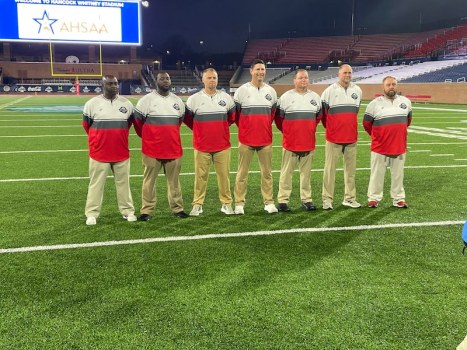 Coaches from different school were selected by Jim Bob Striplin of Geneva County to coach for the South team. (BRAD ABBOTT | CONTRIBUTED)

Maplesville High School football coach Brad Abbott was one of the coaches to participate in this year’s AHSSA North South All-Star game.

“I was definitely surprised,” Abbott said. “It is an honor to be chosen to do something like that. It is a lifetime opportunity for some people like me. I was very excited.”

Abbott said this was his first time participating.

“They select the head football coach for each team and then those coaches … get to pick their staff,” Abbott said.

Head coach for the South team Jim Bob Striplin of Geneva County asked Abbott to be the defensive back and special teams coach. Seven coaches per team participated.

Striplin told Abbott that he was looking for coaches that would work together well as a team, “were like-minded” and trustworthy.

The coaches then decided on the student athletes to invite to participate.

“It was a different experience because you are working with the best players at their positions,” Abbott said. “It was definitely fun to be around that much talent at one time.”

“That was cool that we got to do it one more time together because we didn’t really see ourselves doing that ever again,” Abbott said.

Getting to talk to coaches from other high schools was also something Abbott enjoyed about participating.

“It was long days, but there was something going on all the time, so … you didn’t realize that you had been up that long,” Abbott said.

He said the teams came together really quickly.

“I think it is because they are all high level at what they do,” Abbott said.

He said it was evident that the student athletes had been playing for several years.

The game took place in Mobile, and the Mobile Athletic Club coordinated night activities for the athletes to go bowling and a battleship tour.

Getting to use the University of South Alabama facilities was also a fun experience.