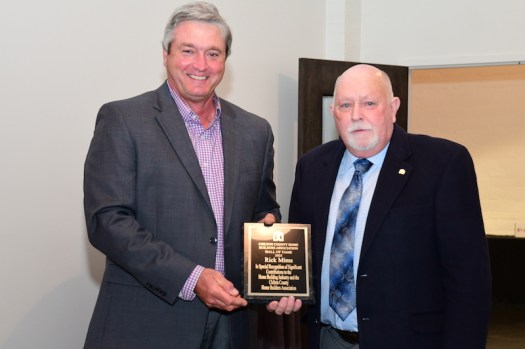 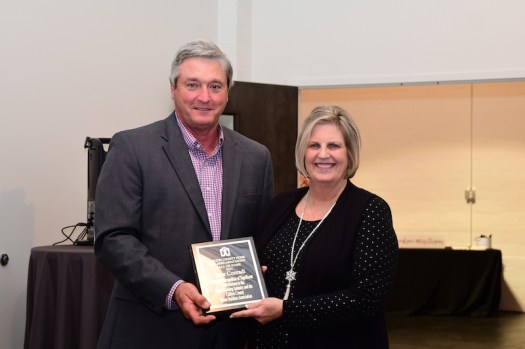 Jane Conradi, Needra Little and Rick Mims were honored for their service to the association during their induction.

“It means a lot to me for this tonight,” Conradi said.

Conradi was active with the association for more than 20 years, serving as a volunteer, executive officer at the local level and a committee member at the state level.

“You are so worthy of this honor and distinction … congratulations,” Russell Davis, executive vice president of the Home Builders of Alabama, said.

Association president Kevin Nelson said when he had served as president for the first time, Conradi was the secretary and organized all of the meetings. He said he still calls her on occasion with questions about the association.

“It was 1985 when they elected me as the secretary/ treasurer of the home builders association,” Conradi said, commenting that she had not been to a meeting previously. “I took off from there, and I really enjoyed the work. I enjoyed knowing all of you all and watching the work that you do. I admire the work that home builders do.”

She said many of those she met through the association became her best friends.

“I think a testament to Jane is the first year we did the hall of fame … and she put together a slideshow presentation with everybody’s pictures and memorabilia,” Davis said. “She had been retired for several years. She came back and did that because she thought it would be memorable for the folks that got installed. I think that is a testament to her commitment to the association here and the people she has worked with.”

Mims is still active in the association and has served as president several times.

“I have enjoyed it,” Mims said, recounting meeting new people and meeting with presidents of other associations.

He said the association was important because it was a way to give back to the community.

This past year, the association has given to the Chilton County DHR Christmas fund and high school building competitions.

Davis recounted that one of the times Mims served as president was while the industry was having a difficult time.

“That’s important,” Davis said. “He made that commitment, even when he was struggling like everybody else.”

He said the award was “well deserved.”

It was Mims that set Nelson to be the president of the association one year.

During hard times back in 2008, Mims “kept this association together,” Nelson said.

Little could not be present for the ceremony, but Nelson said her plaque would be given to her.