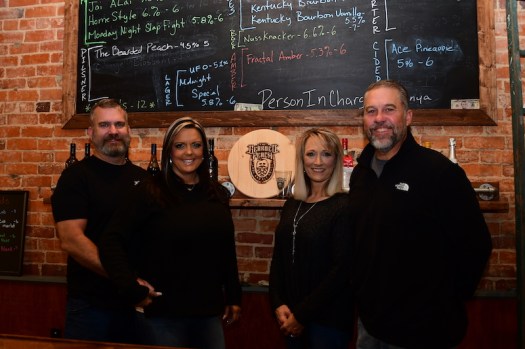 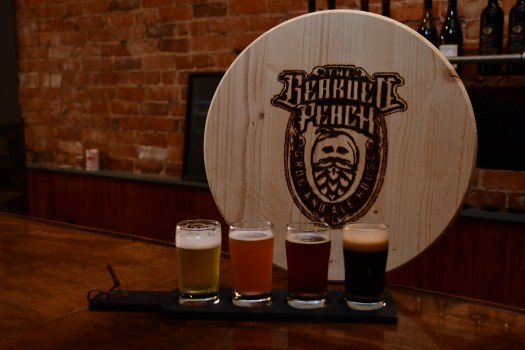 Many of the craft beers served at The Bearded Peach are created by small Alabama breweries. (JOYANNA LOVE | ADVERTISER) 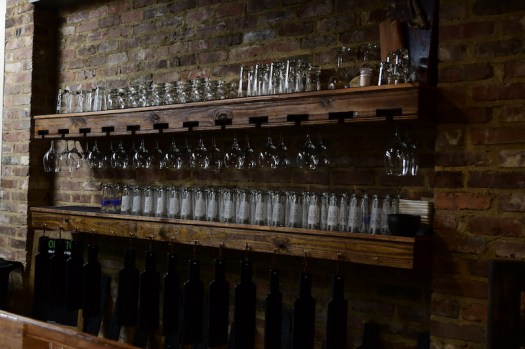 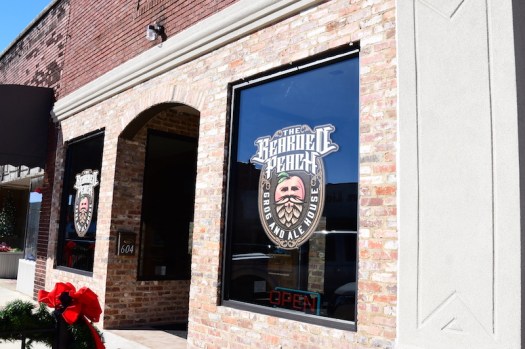 The business type is something new for Clanton, but the look and decor of The Bearded Peach Grog and Ale House preserve a classic downtown look.

Located at the corner of Second Avenue and Sixth Street, the business is a joint venture of  Sonya and John Stewart of Marbury and Adreane and Jerome Barrington of Clanton.

John Stewart has experience running similar businesses in the region, having owned two other craft houses.

The Bearded Peach serves a variety of drinks created in craft breweries in small batches. Many of the companies are located here in Alabama.

“We are all about supporting local and supporting the small guy,” John Stewart said. “There are just so many flavors that you can get in craft beer that you can’t get in domestic style.”

Of the Alabama varieties, Good People India Pale Ale is his favorite.

“Good People IPA was the first craft beer I ever had,” John Stewart said.

Avondale Spring Street in Birmingham is a favorite for Jerome Barrington, but he said he likes to try anything new that comes in.

After the Clanton City Council approved draft beer sales to begin in August, the group began discussing possibilities and looking for a location.

“We (Stewarts) used to eat at Bertolone’s all the time, and we would always look at this building and talk about how it would be great to have a business in this spot right here,” John Stewart said.

The owner had been remodeling the building to rent out. The future Bearded Peach owners discussed the possibilities with him, and viewed some other locations.

However, being downtown and near Corner Park was the best fit.

He said locating downtown was a good fit to create something to do in the evenings and contribute to the efforts to bring more people and businesses to downtown streets.

“I think that fits inline too with what the mayor is trying to do — bring in new business,” Jerome Barrington said.

Even while making the building their own, Sonya Stewart said they wanted to keep it “as original as possible.”

Jerome Barrington said the building “keeps the nostalgia of old downtown vibe and that look.”

The building is thought to have been constructed in 1930. Windows added to the side of the building facing the park allow customers to sit and see downtown and Corner Park.  The decor of Bearded Peach embraces a rustic look that shows off the building’s original brick, ceiling and green tile floor

“I love the original ceilings and the brick walls,” Sonya Stewart said.

Seating is hand built wooden chairs and slab tables, built by the Stewarts and the Barringtons.

While the building is classic, the company logo is completely original. Sonya Stewart said she wanted to incorporate a beard and a peach in the logo and worked with Jason Bridges at TA Wear in Wetumpka to develop it.

When it came time to open, there were a few supply-related challenges, such as an increase in wood costs and equipment being back ordered.

The business opened on Nov. 13 and has been well-received.

“Clanton has been real receptive to it,” John Stewart said.

The proximity to Corner Park also creates some possible opportunities for entertainment.