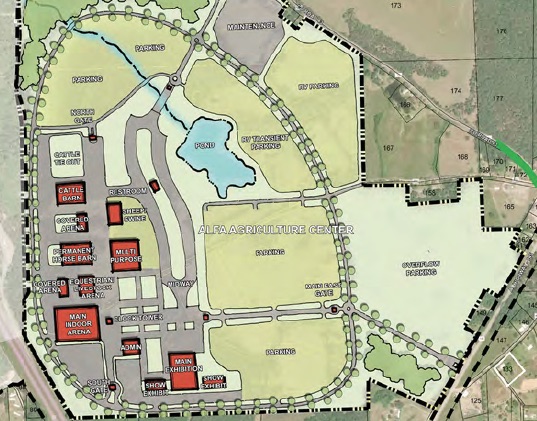 Local leaders are considering options for securing the needed wetland credits for the proposed Alabama Farm Center site, if the Alabama Farmers Federation cannot purchase them by the Dec. 17 deadline.

The credits allow the project to disturb wetlands at the site by supporting a wetlands preservation project somewhere else in the region.

The Clanton City Council received an update in the discussions between the city, county and the Alabama Farmers Federation during a work session on Dec. 9.

“We are trying to do everything we can to accommodate them, and us still hold what we need here as the city and the county,” Hardee said.

Mims said securing the wetland credits was a time-sensitive issue.

Council member Billy Singleton said if the credits are not secured by the deadline, they could be made available to someone else, and the process might have to start all over.

The current plan is for the city and county to pay the $875,000 to secure the credits, if Alfa/ Alabama Farmers Federation does not.

Mims said this was the “worst case scenario.”

“The way that would work is the county would pay it through the IDA (Industrial Development Authority) on the agreement that the IDA gives us an MOU (memorandum of understanding) stating that after we pay this and get these credits it is transferred into the city of Clanton and Chilton County’s names. We own the credits for that section,” Hardee said.

An agreement between the city and county would also be needed, stating that the city will reimburse the county for half of the cost.

Hardee said he would be presenting this plan to the Chilton County Commission on Dec. 14.

During the Clanton City Council voting session on Dec. 13, the council is set to consider approving a $25 an hour fee for events and parades that require road closures, in order to offset the cost of police officers’ overtime that have to work on their normal day off to insure everyone stays safe. Four days will be designated as free parade/ event days with the fee being waived for everyone scheduling an event on that day. These will be the day of the Peach Festival Parade, Martin Luther King Jr. Day, Back the Blue and one other day. Police Chief Erick Smitherman said the dates would be posted on the city website each year.

“Parade permits have kind of spiraled out of control over the past couple of years, where everyone wants to have a parade,” Smitherman said.

He said some of these events have had only a few people, but for safety, roads still have to be closed and officers have to work the event. Smitherman said this can cost the city $1,000 in overtime pay.

The council will also consider a $500 donation to the United Way of Central Alabama, which benefits Chilton County, and an agreement for designs for pedestrian bridges and a no-rise certification for the Ollie Park bridge. Mims said the state is set to consider a bill that would match every dollar local governments spend on infrastructure, and he wants to have projects ready in case it is approved. The council will also likely appoint a new municipal prosecutor as the current one is resigning.