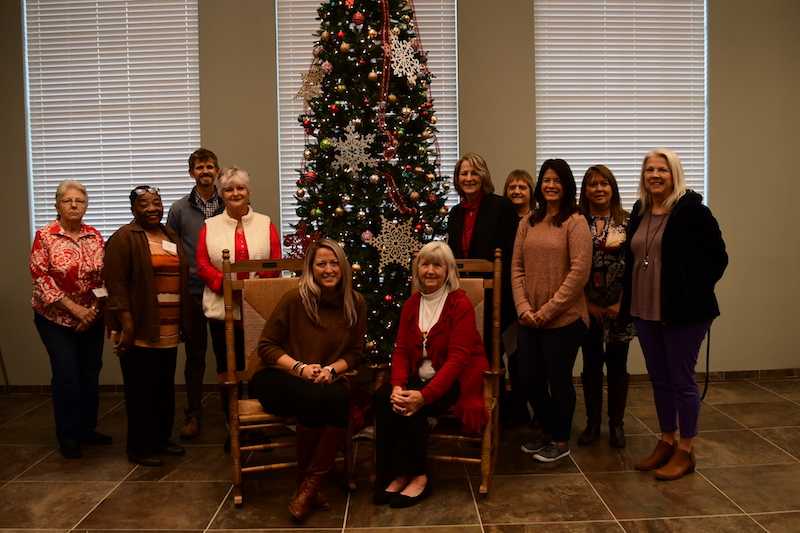 Family members of Rex Edwards sit in the rocking chairs purchased in his honor, surrounded by Chilton County DHR board members and staff. (JOYANNA LOVE | ADVERTISER)

The positive impact of Rex Edwards on this community will continue through the Chilton County Department of Human Resources.

Two rocking chairs purchased with funds donated in his memory will serve as visual reminders of his dedication to the DHR board and the children it serves.

A dedication ceremony was held on Dec. 8 as those who had served with Edwards spent time with some of his family to share memories.

Colson said the family had asked that in lieu of flowers for the funeral donations be made to DHR. The funds were then used to purchase the chairs. The rocking chairs will be used in the visiting rooms for parents and children.

Board members recounted the joy he always tried to bring at the end of the meetings by telling a joke. If he could not attend in person, he would call in to the meeting to tell a joke.

She said he will always be remembered and missed.

Colson said he attended board meetings even after his health was in decline.

“I am really, really touched by this and appreciate all of the people that contributed at his funeral,” Rex’s wife, Dee Dee Edwards said of the dedication.

Rex and Dee Dee were married for 47 years, and they had three children Andy Edwards, Heather Smith and Sara Bagley.

In addition to owning Edwards Jewelers and his work with DHR, Rex Edwards was involved in the community through the antique car club and exchange club that he helped form.