Giles signs with University of Alabama 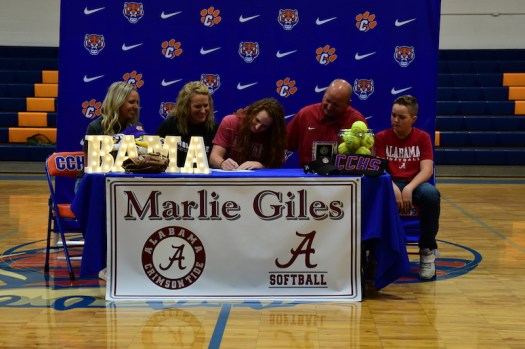 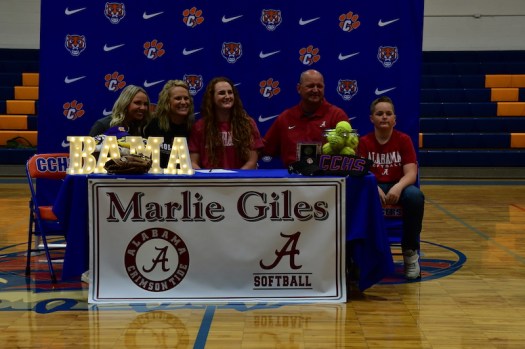 Marlie Giles of Chilton County High School celebrated the opportunity to take her softball skills to the next level playing for The University of Alabama during a signing ceremony on Dec. 8.

“This was my dream school,” Giles said. “This is where I wanted to go.”

She said growing up her family was all Alabama fans, and she attended several of the softball games.

“After I started getting recruited, actually getting to meet the coaches and getting to know them, I knew that was where God wanted me to be,” Giles said.

She said she will be a utility player.

“They recruited me as a catcher/ outfielder …  but it is really wherever they need me, that’s where I am going to play,” Giles said.

She is looking forward to playing at the college level.

“I have been playing travel ball at a really high level for a while now, but I am ready to see how I come up against these other girls, I want to see how I perform, and I feel it is going to be a very good outcome,” Giles said.

During the signing, Coaches recounted seeing promise in Giles from a young age through her determination, skill and good sportsmanship.

Coach David Locke spoke about her outstanding athletic ability, but also about her heart for others.

“That’s why we love her,” Locke said. “… Not only is Alabama getting a premier athlete, they are getting an even better person, who has a heart of gold. We are so excited for you.”

Michael Deason, CCHS assistant softball coach, was also Giles’s coach in her pre-high school softball days. He said he had been her coach for about 14 years.

“She has always been awesome,” Deason said. “… Marlie is the most competitive. She has just got this fire in her that in her younger days was a little hard to handle.”

He said she has now grown to handle that fire and is a “phenomenal person.”

Giles began learning the sport at 3 1/2 years old. Giles said her parents worked with her and  helped her develop her skill.

“Without my parents, this would not be possible,” Giles said.

Numerous friends and family were on hand to help Giles celebrate signing with Alabama. Giles thanked everyone for their support, commenting on how close she has gotten to her teammates. She said the CCHS softball team was her “second family.”

Giles has also played basketball during her time at CCHS. She said the team was a group that could laugh together, but also talk about important things together.

In her list of thank yous, Giles also thanked God for giving her the skills to play softball that she has been able to develop.

“I was playing in High school doing very well,” Giles said. “I try my best to show Him through me, and then He gave me an even better opportunity, He gave me the opportunity to play at University of Alabama.”