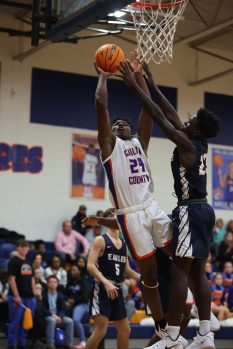 Demarcus Riddick led the Tigers with 12 points and 8 rebounds during the boys varsity team game against the Eagles. (BRANDON SUMRALL | ADVERTISER) 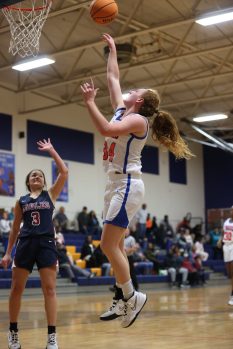 The Chilton County Tigers and the Montgomery Academy Eagles split a pair of varsity basketball games on Dec. 7 as the visiting Eagles knocked off the Tigers varsity girls 49-36 while the Chilton County varsity boys picked up a 44-37 win.

The Lady Tigers got off to a bit of a rough start as a pair of free throws by Tyeshia Williams along with one from Iasia Anderson was not nearly enough to keep pace with 15 on the period by the Eagles as Chilton closed out the first period trailing 15-3.

The Tiger scoring improved a bit in the second as five by Anderson along with two from Williams gave the Lady Tigers eight on the period, but with the Eagles notching 13, Chilton went to the halftime break trailing 28-11.

Chilton turned things around a bit to start the third as the Tigers outscored the Eagles 14-6 on the period thanks in no small part to six points from Marlie Giles as Chilton cut into the Montgomery Academy lead 34-25 to end the third.

The fourth and final period saw the Lady Tigers keep pace with the Eagles, but despite five more points from Anderson and three from more Williams, Montgomery Academy cruised to a 49-36 victory over the Tigers.

Anderson led the Tigers with 16 points and 7 rebounds while Williams added 10 more points and 11 rebounds.

The first period of varsity boys action was a blow for blow bout as five different Tigers would combine for 14 Chilton County points in the period as the Tigers ended the first with a 13-11 lead.

A basket by the Eagles to start the second tied the game early in the second, but would be answered by a three-point play by Riddick. Bolding later extend the Tiger lead to six as Chilton hit the locker room with a 24-19 lead.

Floyd made it a seven-point game early in the third period but was answered with a three from the Eagles to cut the lead to four. Riddick and Bolding combined to push the Tigers out to an eight-point lead, but it was a 6-0 run by Montgomery Academy that made it a two-point game going into the final period of play.

A basket and free throw by Floyd started the fourth to make it a 35-30 game but was again answered by the Eagles to cut that lead to one. The one-point lead remained intact until the 3:26 mark of the period where a free throw by Riddick along with a basket from DeJarnett put Chilton up four. With the addition of a pair of free throws by Davis, the Tigers went on to close out a 44-37 victory over the Eagles.

Riddick led the Tigers with 12 points and 8 rebounds while Bolding added 11 points and 7 boards.