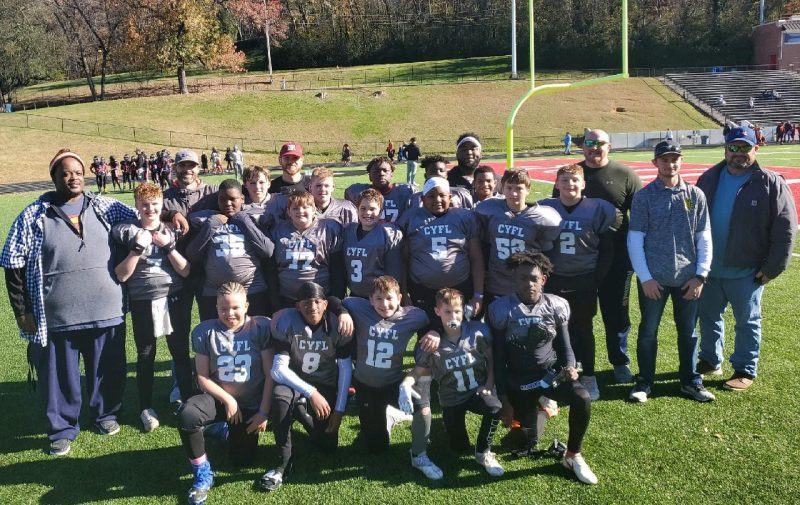 The Chilton All-Star team competed in a national tournament in Chattanooga, Tennessee. They won two of the three games they played in the tournament. (JAMES RICHARDS/ CONTRIBUTED)

The Chilton All-Star youth football team had very little time together before they hit the road for Chattanooga, Tennessee. In fact, they only had four practices together.

That did not stop them from competing and winning.

The all-star team, made up of the best players in the Chilton Youth League, competed in a national tournament in Chattanooga on Nov. 26 and 27, and they won two out of the three games they played. They defeated the Virginia Spotsy Tigers by a score of 15-6 and beat the Tennessee Giants thanks to a forfeit. Their only defeat came at the hands of the Georgia Rattlers by a score of 14-6.

Head coach James Richards was impressed with his team’s effort, especially given the lack of time the team had together.

“Going off four practices, we went up there and just wanted the kids to experience this type of environment, being on a national level, competing,” Richards said. “So, we weren’t really expecting to go up there and do a whole lot, just have the kids have fun, but we wound up going up there and finished with a 2-1 record … The kids had a blast, the parents had a blast, and it was just a real good experience for them.”

Putting the team together and competing in the tournament was a last-second decision. It was a good experience for everyone involved. But while there are hopes that more tournaments could be in store in the future, what comes next for the all-star team, or any future all-star teams, is unknown at this point.

“There’s another tournament next year for the 12U,” Richards said. “I know some parents made some comments about going back and doing that, but as of right now we’re not sure what the future lies on that side of it, being a year away.”