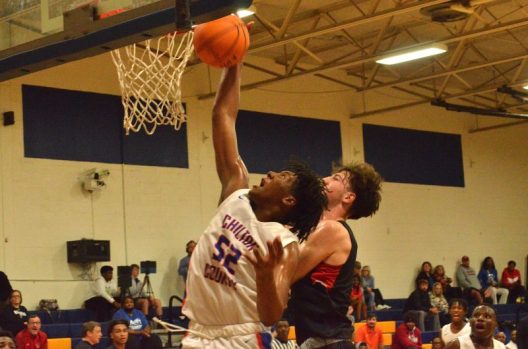 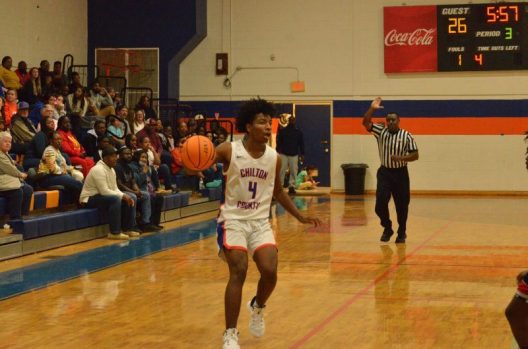 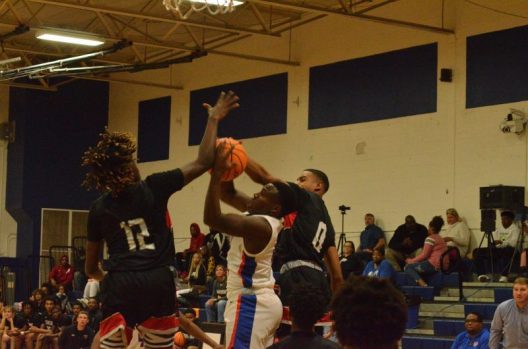 Jamon Dejarnett secures a rebound for CCHS in its win over Thompson. (ZACHARY SEIFTER/ ADVERTISER)

Chilton County High School’s boys basketball team earned a big victory over Thompson High School on Nov. 30, knocking off the Warriors by a score of 58-48.

The victory improved the Tigers’ record to 3-2 on the season, and gave CCHS some revenge for a 65-50 loss to Thompson earlier in the season.

CCHS had a significant home-court advantage in the game, as the stands were filled with rowdy students and fans that were eager to see the Tigers compete against the 7A school.

They were not disappointed, as CCHS jumped out to an early lead. The Tigers offense hit some big shots, including a buzzer-beater from Jakeveon Bolding, to take a 22-12 lead into the second quarter.

Thompson did not go quietly, however. The Warriors battled back in the second quarter, knocking down three-point shots to climb back into the game. At halftime, the score stood at 30-26 in favor of CCHS.

Thompson continued to gain momentum early in the second half. The Warriors outscored CCHS in the third quarter 11-8, giving the Tigers a one-point lead heading into the final quarter.

CCHS was able to shut things down from there though. The Tigers scored the first five points of the fourth quarter, giving them a six-point advantage, and they did not let up from there.

They continued to make some big shots. After a technical foul by the Thompson coach gave CCHS a pair of free throws and possession of the ball, it began to feel as though the Tigers had the victory in hand.

The Tigers were able to finish off the victory, shutting down the Thompson offense in the final minute to clinch the 58-48 win.

“I just challenged the guys, just to play as hard as you can,” CCHS head coach Austin Moncus said after the game. “I feel like we didn’t give them our full effort when we played at Thompson, and they had a tough environment to play in, but our guys, they took the challenge and they ran with it. They played as hard as I’ve ever seen them play … This is one of the best teams that I’ve ever been around, and if they can just play as a team, and just get after people, we’re going to be a really fun team to watch.”

This was certainly a statement win by the Tigers, and it is one that can propel during a season. A higher bar has now been set, and Moncus expects his team to meet the higher expectations.

“This will be something that we always come back to,” Moncus said. “… That’s a really good team that we beat. I think it does raise the expectations, (whether it’s) expectations at practice every day, in the school, in the classroom. We hold our guys to a pretty high standard … so I think this does raise the standard on the basketball court as well.”

The Tigers will have the opportunity to build on this win when they visit Shelby County on Dec. 2. Tip-off for that game is scheduled for 7 p.m.