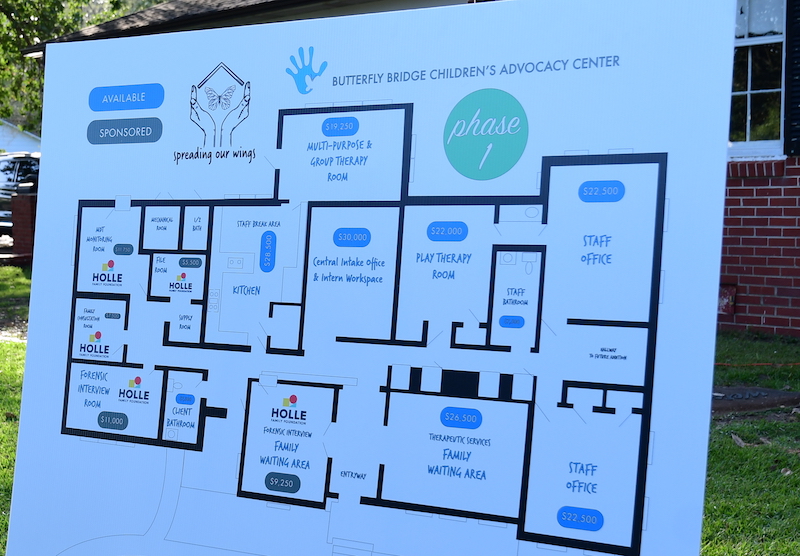 Director Jana Zuelzke said they hope to be serving children in the new location on Dec. 13.

“What’s great about it is we are going to be able to serve a lot more kids at once, than we are able to do now,” Zuelzke said.

Butterfly Bridge Children’s Advocacy Center provides forensic interviews for children that have been abused that are used in criminal court cases, eliminating the need for the child to tell what happened multiple times to each of the different agencies involved.

The organization also provides therapy for these children.

The organization reached its monetary goal for phase one of its capital campaign connected to the move in October.

Phase one included painting the exterior of the house, which is expected to be completed this week, interior changes and new equipment.

The new location, which many in the community know as the Moore house, will give Butterfly Bridge more than twice the space of its former location. The organization is in a lease to own agreement with the city of Clanton to purchase the property.

Satellite offices in Elmore and Autauga counties and video conferencing options are being used to continue to serve children during the transition to the new location.

Outreach coordinator Brittani Ellison said efforts for phase one had begun in June by pursuing grants. Then, in August, the organization invited the public to donate to the campaign.

“We are always able to call upon the community, and they are able to help … but it is a nice surprise for it to happen as quickly as it did,” Ellison said.

“We are blown away, but at the same time we are not surprised in many ways because we have gotten so much wonderful support, people that really connect with our mission and we are extremely grateful for that,” Zuelzke said.

An open house for the community is in the works for next year.

Phase two of the capital campaign is expected to begin in the spring.

Phase two would build an addition to the house and expand the services offered to include forensic medical exams onsite and more training opportunities for the community to prevent child abuse.