Part of the Flock 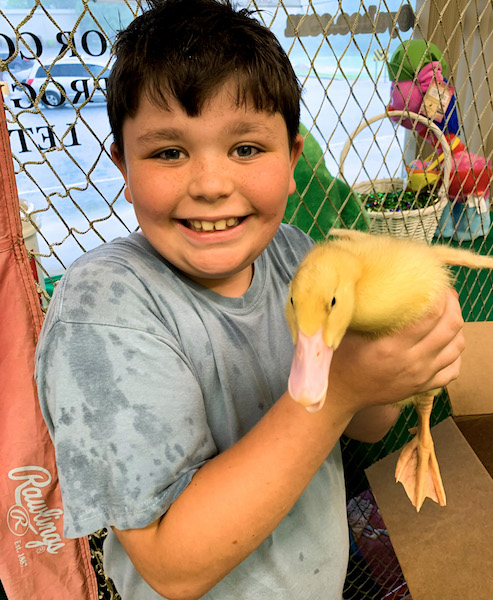 “A boy and his dog” and “Man’s best friend” are common expressions for the close bond of friendship between boys and their dogs, but Cooper Gray, age 11 of Clanton has different best friends. At the beginning of the pandemic, Gray and his grandmother Jennifer Carter visited Jones Seed & Feed and purchased several ducklings. Since then, Gray has acquired a few rescues, bringing his flock to a total of eight ducks.

Gray, who also has two cats and a dog, said he loves them all equally.

“The ducks love to cuddle and sleep huddled in a ball at night time,” said Gray.  “They also greet visitors and show affection by nibbling on people. They will nibble on your skin, especially your feet like they are cleaning you of insects. It doesn’t hurt unless they bite your toes. You can never wear flip-flops around them. They will bite your toes off!”

Gray and his family converted the lower level of his tree house into a nesting barn for the ducks to sleep in at night. The family also enjoys taking the ducks to the local park to play in the mud-puddles after it rains and visiting a family pond where the ducks enjoy swimming.

“When we are ready to go, we just ‘quack’ at them and they come out of the water and running back,” Carter said.

‘Marshmellow’ (one of Gray’s ducks), has a deformed leg, and Gray said he feels passionate about providing a home for other ducks that may have special needs.

“If there are people in the community that don’t want their ducks anymore, or if the duck has a disability, I will take it and give it a happy, loving home,” said Gray.

Gray currently has four Pekings and four Mallards, which can get up to nearly 3 feet tall and weigh around 13 pounds. After cleaning the nesting barn, Gray places fresh shavings on the barn floor which promotes the ducks to lay eggs, which are twice the size of a large, Grade A chicken egg.

“During summer and spring, I can get anywhere from five to nine duck eggs a day,” said Gray. “During the winter months, they will only lay about three a day.”

Gray and his family use the eggs for baking, which he describes as larger, richer and fluffier than compared to a chicken egg. Cooper and his family also sell them when they have a multitude.