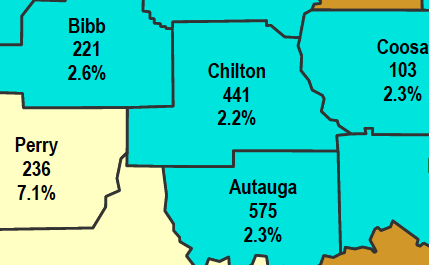 The Chilton County unemployment rate was 2.2% in October. (ADOL/ CONTRIBUTED)

Chilton County had a 2.2% unemployment rate in October.

The Alabama Department of Labor released the October unemployment statistics on Nov. 19.

The rate represents 441 people who are unemployed.

Several businesses opened or were getting ready to open in downtown Clanton in October. Local chain restaurants continue to advertise hiring at higher than usual rates of pay for the Chilton County area.

The county rate continues to be below the state average of 3.1%, which was the same for October and September.

“October’s unemployment rate held steady this month, despite ongoing pandemic related hiring struggles, and we actually dropped to the lowest number of unemployed people so far this year,” Fitzgerald Washington, Alabama Department of Labor secretary, said. “The labor force showed some positive growth this month, which is definitely welcome news as we begin to shift into the holiday hiring season. For more than a year, Alabama has proven that we will return to our pre-pandemic economic successes.”

The low state unemployment rate represented a new record for employment for the year with 2,070,500 of the workforce being employed, according to a ADOL press release.

“Monthly gains were seen in the professional and business services sector (+6,400), the leisure and hospitality sector (+5,600), and the education and health services sector (+4,700), among others,” according to the release.

Washington said he expects positive trends in employment to continue with seasonal hiring in the next month.