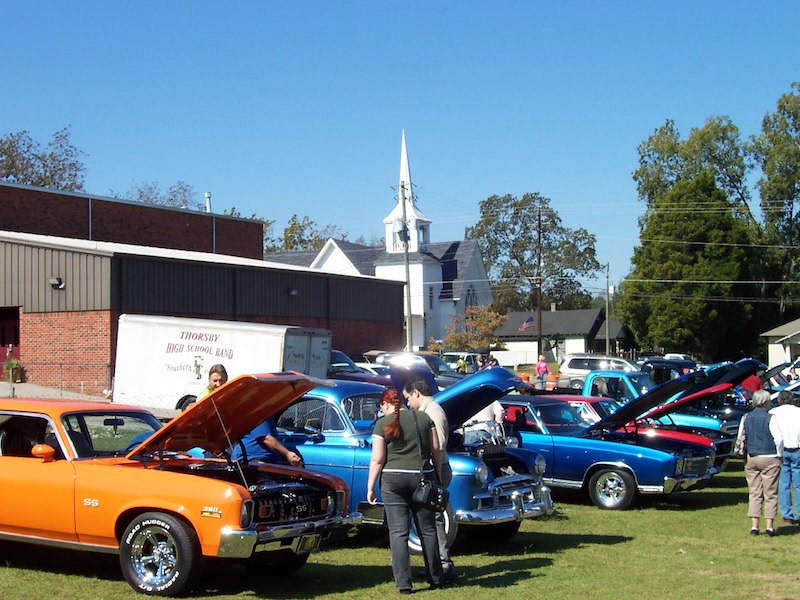 A car show was added in the early years of the festival. Attendees enjoyed this show in 2008.

Editor’s Note: This article was originally published in Generations 2021. Copies are available at The Clanton Advertiser office, 1109 Seventh St. N.

This annual festival started in 1988 as a fundraiser for the Thorsby High School band.

Current Festival chairperson Laura Liveoak said Brenda Price and Rita Price were the founders of the event as a way to raise money for new band uniforms.

“Her brother, I think it was, got killed, and they did it sort of as an ‘in memory’ of him,” Liveoak said.

The festival title recognizes the Scandinavian heritage of many of Thorsby’s early settlers.

“It was just around the school, and it had maybe 10 little vendors and that was it,” Liveoak said.

Later, the event grew into a larger festival with more activities at Richard Wood Park. This expansion added a parade and a pageant. Today, the festival also includes a Viking 5K run and a car show.

Liveoak has a committee that helps her coordinate the event. This year, the 5K was hosted by the Thorsby Fire Department and coordinated by Josh Parker.

Greg Marcus and Terry Jackson have taken on coordinating the car show.

“We greatly appreciate them stepping up,” Liveoak said.

Liveoak has been a part of coordinating the festival for 26 years.

“I enjoy the vendors and meeting them and seeing all of their art and crafts,” Liveoak said of the event.

“We bought the welcome to Thorsby signs,” Liveoak said. “We bought the electronic sign for the Town of Thorsby (town hall). We do up keep on Helen Jenkins (Chapel), bought playground equipment, paved the walkway at the park. We put electricity out there, paid for bathrooms to be put out there.”

Funds have also been used to purchase a speed detection device for the police department and curtains and an electronic sign for Thorsby High School.

Liveoak said funds raised through the festival can be used for anything that the town needs.

The Swedish Festival committee decides how the funds are used each year.