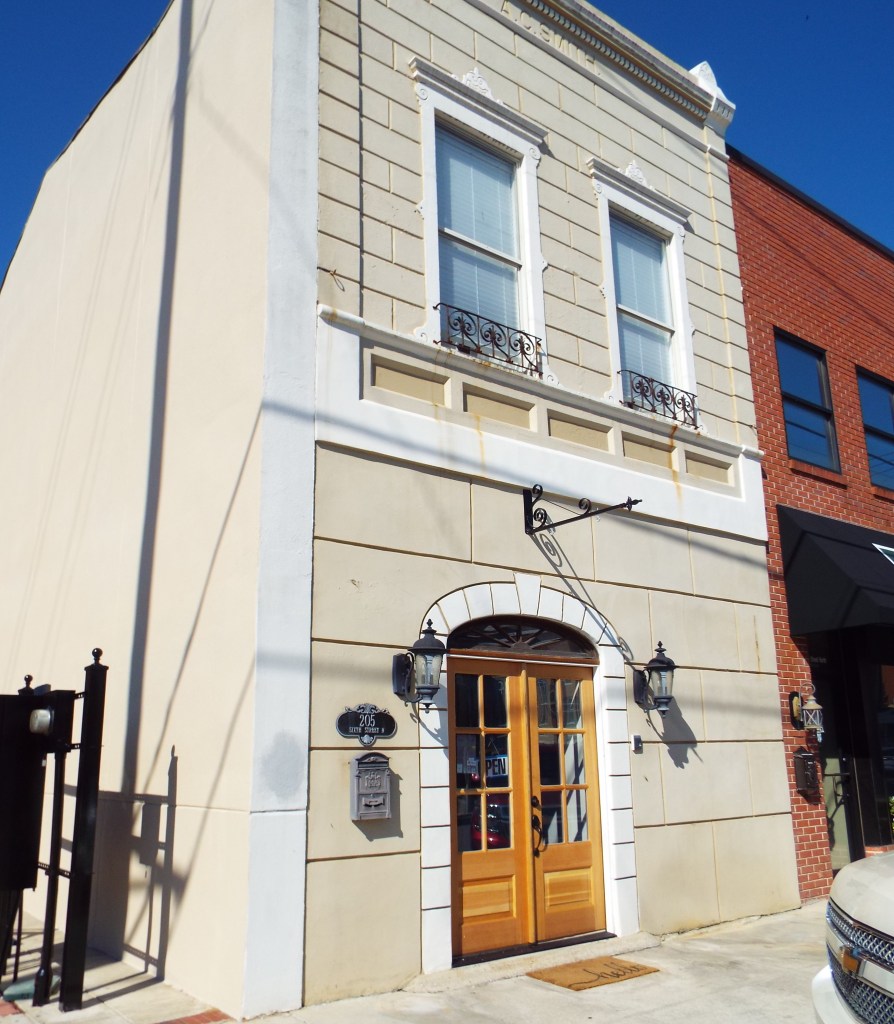 “A.C. Smith” can still be seen it the top molding of the building. (CHILTON CHAMBER/ CONTRIBUTED)

Next to Corner Park on Sixth Street N. in downtown Clanton stands a building that has a history of housing influential institutions.

Today, it is the home of the Chilton County Chamber of Commerce.

“We’ve always loved this location, this spot, this building, and after we had moved above the bank, Billy (Singleton) just made mention that we would love to have this because it’s right by Corner Park, it would be a perfect location for us,” Chamber of Commerce Executive Director Rachel Martin said in a previous interview. “The next day, Todd Bowen, the owner called and said ‘Hey, it’s available. Would y’all like to rent it?’ And we jumped on it. It was like it was meant to be.”

Local historian Derric Scott has compiled a brief history of the building and its former occupants, and Chamber personnel use this to answer questions about it.

When it was built in 1902, the two-story building was the law office of Allison Constantine Smith, who had previously served as the county solicitor and county clerk.

This building was one of the first brick buildings to be built on the street after the original wood frame buildings were destroyed by a fire in 1901.

The original inset shelving and cabinets can still be seen in the downstairs rooms. Some of the flooring is also thought to be original.

Ornate molding lends to the building’s exterior charm. According to a Union-Banner article, the creative work was completed by Elias Hopkins.

According to Scott’s research, Smith moved to a new building in 1911.

Dr. V. J. Gragg set up his office in the lower floor. In 1915, the Union-Banner newspaper moved its offices to the second floor. Another law office, Reynolds and Reynolds, moved into the building after the newspaper office moved out.

According to Scott, Smith would later return to the building to open a law office with his son Cecil, after the younger Smith completed his law degree at the University of Alabama. Other partners in the firm in later years included T. Calvin Stephens and Raymond C. Smith.

As one looks at the built-in shelving and seating in what is now one of the Chamber offices, one can almost imagine the rows of law books and case files on the shelf.

Other businesses have called the building home over the years including the Clanton Mattress Factory, the Helene Curtis Beauty Shoppe and most recently Sadie’s Loft.

Just as the A.C. Smith building has had several occupants, the Chamber of Commerce has had a few other homes. The first location was a red caboose behind Peach Park.

The Chamber then moved closer to downtown into a house near City Park.

Most recently, it had been located on the second floor of the River Bank & Trust building in downtown Clanton