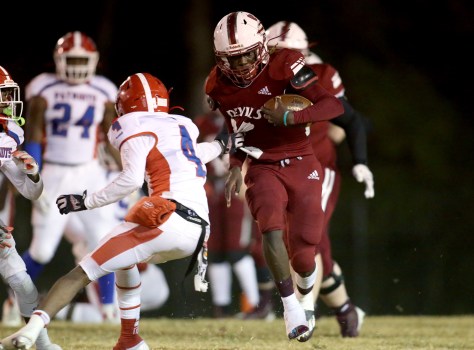 Maplesville defeated Linden on Nov. 12 by a score of 22-15. (BRANDON SUMRALL/ SPECIAL) 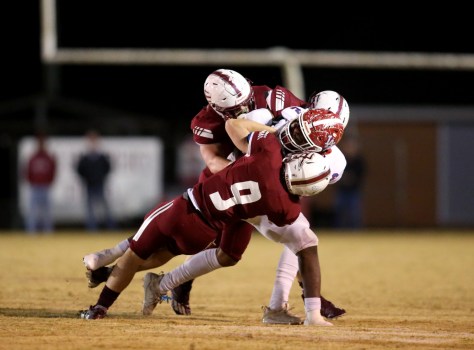 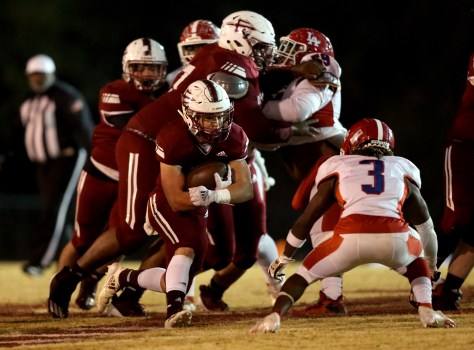 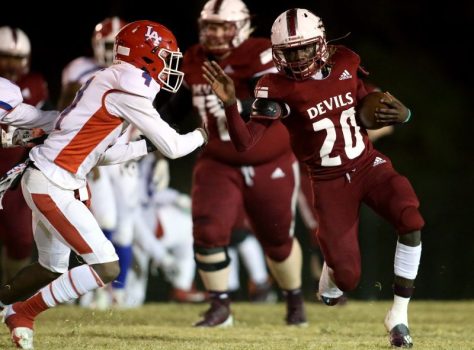 Maplesville’s Jakavion Jackson takes off for a run in the win over Linden. (BRANDON SUMRALL/ SPECIAL)

The Maplesville Red Devils faced a familiar foe on Nov. 12 in the second round of the AHSAA 1A State football playoffs as the Linden Patriots came to town. In what has become a tradition between the two schools, the game was a hard-fought battle that came down to the final moments as the Red Devils pulled off a fourth quarter comeback to knock off the Patriots 22-15.

Maplesville opened things up by giving the Linden defense a healthy helping of running back Brady Harrison. Runs of seven yards, five yards, seven yards, four yards and six yards by Harrison moved Maplesville down to the Linden 32-yard line. On Harrison’s next run, he found the end zone to give the Red Devils an early 7-0 lead.

After a pair of three-and-outs by both teams, the Patriots took over for their third possession of the night. However, after one first down, Linden was once again forced to punt, setting up the Red Devils offense at their own 32-yard line.

This time, Maplesville added Jakavion Jackson to the mix in the backfield. The Red Devils drove down the field behind Jackson and Harrison. Facing a first and 10 at the Linden 16-yard line, Jackson finished off the drive with a touchdown run to put the Red Devils up 14-0 midway through the second quarter.

Neither team scored any points the rest of the quarter. Maplesville led 14-0 at halftime.

The early moments of the second half saw both offenses stall. Linden took back over for its second possession of the third quarter at its 10-yard line.

A pass completion from quarterback Dewoyne Charleston to Rederick Brown moved Linden out to the 31-yard line. Three rushing attempts by the Patriots got just across midfield. Soon after, on a first and ten play at the Maplesville 46-yard line, Charleston connected with Lazavier Waters for a Patriots touchdown.

The Patriots chose to attempt the PAT in order to tie the game, but a penalty by Maplesville moved the ball to the one-yard line, resulting in the Patriots changing Linden their minds and going for a two-point conversion. Charleston ran the ball into the end zone, giving Linden its first lead of the game, 15-14 with 7:06 to play.

Following a big kickoff return by Jackson, the Red Devils started their ensuing possession at the Linden 41-yard line. Runs of five yards, one yard, and two yards forced the Red Devils into a fourth and two at the Linden 33-yard line. Maplesville decided to go for it. Harrison broke loose off the left sideon the play, and ran to the end zone untouched for a 33-yard touchdown, putting Maplesville up for good 22-15.

The Red Devils defense needed one more stand to finish off the victory, and they got just that. On fourth and four near midfield, Linden turned the ball over to Maplesville, sealing a third-round home playoff match with the Sweetwater Bulldogs on Nov. 19.

Harrison led the Maplesville ground attack with 171 yards on 30 carries and two touchdowns. Jackson added 62 yards on six carries and a touchdown.