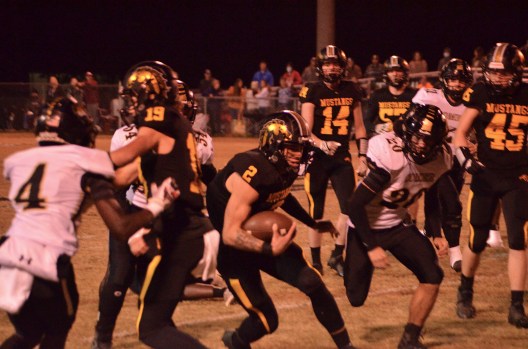 Isabella running back Zac Chapman runs for a first down early in the game against B.B. Comer. (ZACHARY SEIFTER/ ADVERTISER) 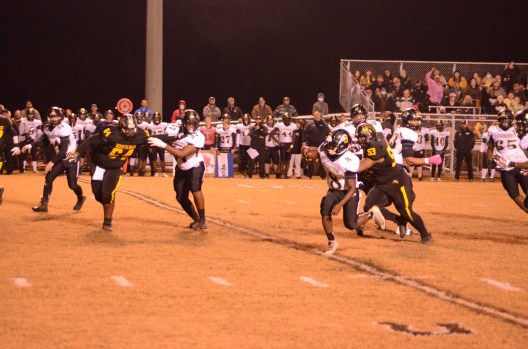 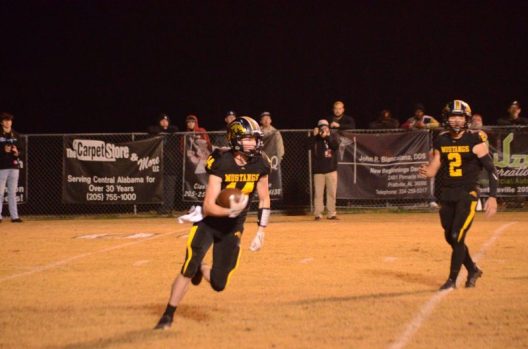 Isabella High School fell in its second-round playoff game against B.B. Comer Memorial High School on Nov. 12 by a score of 34-25.

The game was a back-and-forth thriller, ultimately won in the fourth quarter by the Tigers thanks to a pair of touchdown drives.

The Mustangs came out hot in the first quarter. Quarterback Eli Kendrick guided Isabella’s offense down the field, capping the first drive off with a 19-yard touchdown pass to Phillip Williams.

B.B. Comer responded, however. The Tigers marched 73 yards down the field on their ensuing drive to tie the game.

For much of the rest of the first half, the Tigers controlled the game. They followed that score up with two more touchdowns. The Mustangs got some momentum back before halftime when Braxden Giles took a 50-yard catch to the end zone late in the second quarter. The score stood at 21-13 Tigers at the half.

B.B. Comer’s lead did not last long in the third quarter. After Isabella forced a punt to begin the second half, the offense took the ball 75 yards down the field on five plays to cut the deficit to two points.

Unfortunately for Isabella, the Tigers were able to capture some momentum back after their offense was able to go 70 yards down the field for a touchdown. The score stood at 27-25 B.B. Comer midway through the fourth quarter.

Isabella’s offense took back over and quickly put itself in position to retake the lead. Giles had a 34-yard run to put the Mustangs at the Tigers 26-yard line. After getting as close as the 10-yard line, Isabella shot itself in the foot with a holding penalty and a sack that killed the drive.

B.B. Comer scored on its ensuing drive to put the game away.

“We knew if we could get to the fourth quarter we had a chance,” Isabella head coach Tate Leonard said. “That’s what we had. We got the lead coming out right there at halftime, and we had all the momentum, and it just didn’t end up the way we wanted it to.”

The loss ends what was a fantastic season for Isabella. Many expected the 2021 season to be a rebuilding year after the Mustangs lost quite a bit of talent following 2020. However, Isabella was still able to win its region and reach the second round of the playoffs.

“According to everybody else, this was a rebuilding year,” Leonard said. “I told them right off the bat it’s a winning year, and that’s what we did … After losing 14 seniors last year and 10 other guys that didn’t come back out, I think we did a pretty dang good job.”

Zac Chapman led the Mustangs offense with 130 rushing yards on the game. He also scored two touchdowns on the ground.