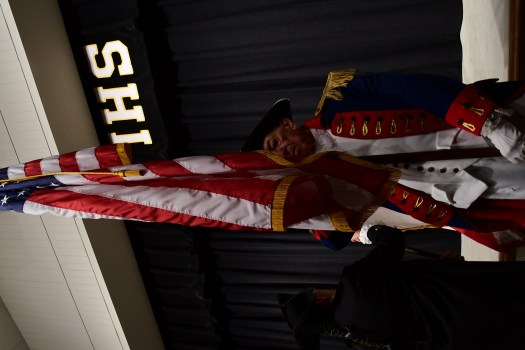 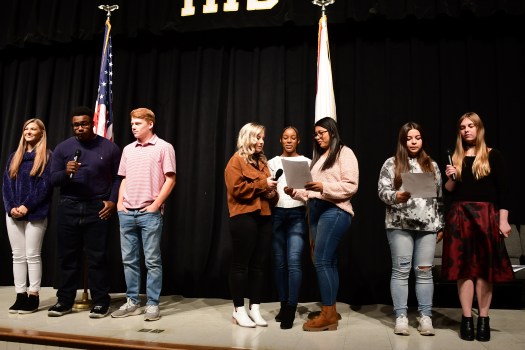 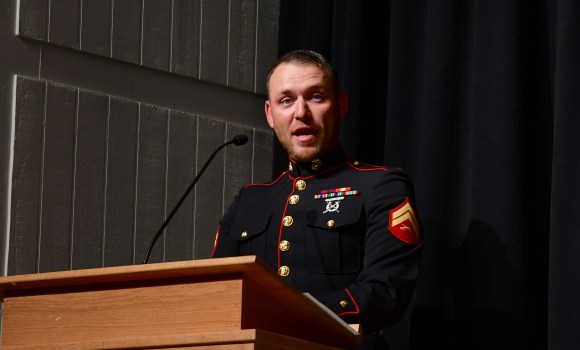 The event featured a reading of the Constitution’s Bill of Rights, patriotic songs and recognition of veterans present as well as those related to students and faculty at the school.

Holt served in the U.S. Marines. He joined after graduating early from Chilton County High School.

“For me, it all started when I was in eighth grade,” Holt said. “I witnessed the attacks on 9/11 … When the U.S. invaded Iraq in 2003, I decided then and there that I wanted to serve this great country and protect its freedom that we all hold so dear.”

He had thought about the U.S. Air Force, but a veteran who had fought in the Battle of Fallujah convinced him to join the Marines.

“He was a battle-hardened Marine who talked about close quarter combat, the extraordinary capabilities of the Marine Corps and the fighting spirit of the Marines,” Holt said. “That was all it took. My mind was made up.”

The day after he finished 11th grade, he enlisted through a delayed entry program. He said his principal worked with him to make it possible for him to graduate a semester early.

After completing basic training at Parris Island, he was assigned to Camp Pendleton.

He was deployed to the Western Pacific in 2007. During this time, he was a part of joint training with military from other countries. He was also involved in training other Marines when he returned to the states.

“I and my fellow Marines, often feel that are service was slightly insignificant,” Holt said. “We all did exactly what was asked of us for our country, but we all feel a bit of guilt because that we know so many of our brothers and sisters sacrificed so much more.”

He reminded students that no matter a veteran’s background they have the qualities that make the United States military great.

“They did not go to war because they love fighting,” Holt said. “They chose to fight because of their love for our country. They were ordinary people who responded in extraordinary ways in difficult times. They answered the nation’s call because they wanted to protect the nation that had given them, and us so much.”

He recounted how Veterans Day is an expansion of Armistice Day, which was initially established to celebrate the ending on World War I and its veterans. The observance was expanded to include veterans of other wars at the request of veterans groups.