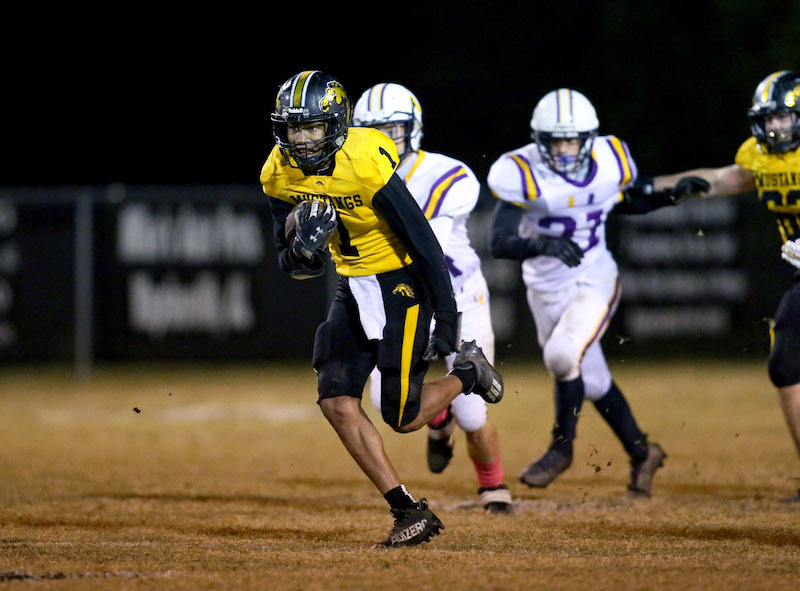 The Isabella Mustangs advanced to round two of the AHSAA 2A State Football playoffs after cruising to a 40-6 first-round home win on Friday night over the J.U. Blacksher Bulldogs.

The Mustangs had victory in their sights from the opening coin toss as Isabella won the toss and selected to receive. Just four plays into the game, quarterback Eljiah Kendrick connected with Braxden Giles for a 38-yard touchdown to put Isabella on the board early, 7-0.

A pair of three-and-outs by both squads set Isabella up with their third possession of the night at their own 35-yard line. A pair of first down runs by Dre’von Lee moved the Mustangs across midfield. Then, a long run by Zac Chapman moved Isabella inside the Bulldogs red zone, where one play later, Chapman made it a 14-0 Isabella lead thanks to a five-yard touchdown run.

The Bulldogs ensuing possession was cut short thanks to an interception by Lee that set Isabella up at their own 19-yard line. Just six plays later, Lee broke through the Bulldogs defense for a 61-yard touchdown.

The Mustangs defense continued to stifle the Bulldogs offense. Another three-and-out by J.U. Blacksher set the Mustangs up near midfield, where a deep pass connection between Kendrick and Giles set Isabella up inside the red zone. One play later, Garrett Price ran in a three-yard touchdown to extend Isabella’s lead to 28-0.

With 5:30 still on the clock in the first half, the Mustangs were far from done as Kendrick found Chapman for a 62-yard touchdown with 1:42 remaining. The score at the half was 34-0 in favor of the Mustangs.

The third quarter of the contest saw the Bulldogs offense finally move the ball. However, their drive stalled at the Isabella 38-yard line. Despite starting with their worst field position of the night, the Mustangs still scored a 55-yard touchdown run by Kendrick to bring the Mustangs’ lead to 40-0 midway through the third quarter.

The Isabella defense was not able to get a shutout, however, as with 8:27 remaining, a halfback pass from Nathan Cole to Dawson Butts put the Bulldogs on the board. It was too late for it to make a difference in the game, as the Mustangs cruised to a 40-6 victory over the Bulldogs.

Kendrick ended the night with 152 yards passing and two touchdowns, with an additional 75 yards and a touchdown on the ground. Caleb Washington led the Isabella defense with 16 tackles.