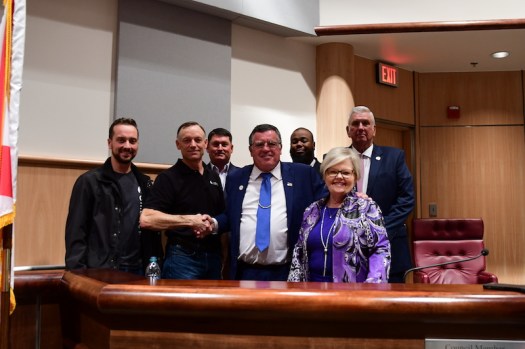 C.J. Walter, far left, and Steve Walter of SLW LLC with Mayor Jeff Mims and the Clanton City Council as the performance-based incentive agreement for Ellianos is signed. 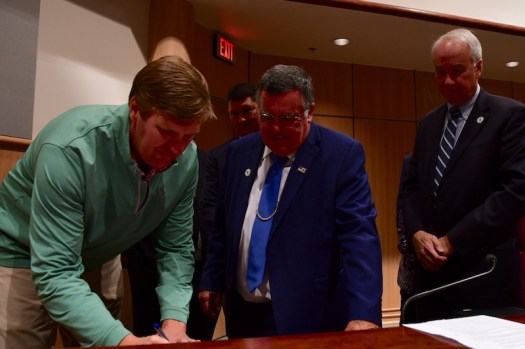 The Clanton City Council has unanimously approved performance-based incentive agreements with two developers to bring coffee chains to the city.

Rod Kanter of Bradley Arant, a lawyer specializing in public finance and economic development that the city hired, gave highlights from each of the agreements before the vote.

He said the agreements were “city favorable.”

Both agreements are based on sales tax generated by the business.

“The payments are only made after the project has been built and completed,” Kanter said. “…If they build the project and the project shuts down for some reason, they don’t walk away with any of your money.”

Kanter said agreements like these are often used to help hard to develop properties get developed.

The SLW LLC agreement would give the company half of the revenue Ellianos brings in up to $45,000 or for six years, whichever cap is reached first. Kanter said the coffee shop would be located near Walmart off of Highway 31.

The DPG Single Tenant LLC agreement would give the company half of the revenue Starbucks brings in for up to 10 years or a monetary cap of $150,000, whichever cap is reached first.

Water and sewer impact fees are being waived for both companies. Each will also have access to a pile of dirt the city needs moved in order to level out their project sites.

Kanter said developing the Starbucks site will cost DPG Single Tenant LLC about half a million dollars. The site will be between the Jack’s and Burger King near Interstate 65, Exit 205, according to developer Michael Delaney.

The plan is for this project to have two tenants. Milo’s was mentioned as a possibility for the second tenant.

Local business owner Mickey Bates asked if local companies had been offered these kinds of incentives.

“Why do we want to bring in someone like (Starbucks) that is going to be competition to our local (Much a Brew)?” Bates said

Mayor Jeff Mims said no one had asked, and later said if a local business owner had to build something new, there were options that could be discussed.

“We think the world of Much A Brew; we don’t feel that this is going to be major competition for them,” Council member Billy Singleton said. “Much A Brew moved directly into an existing building … These two companies are coming in building from scratch.”

Singleton said both of the projects would be creating jobs.

Kanter said incentives are important because the city is competing with other places to be considered.

“In order for the city of Clanton to grow, this is something we are going to have to do,” Council member Awlahjaday Agee said.

Kanter said cities that have offered incentives have “done well” in the area of economic development, and those who have not struggle to grow the tax base and opportunities.

“It is far more expensive to catch up than to stay ahead,” he said.

A timeline for when the projects would be complete was not discussed during the meeting.