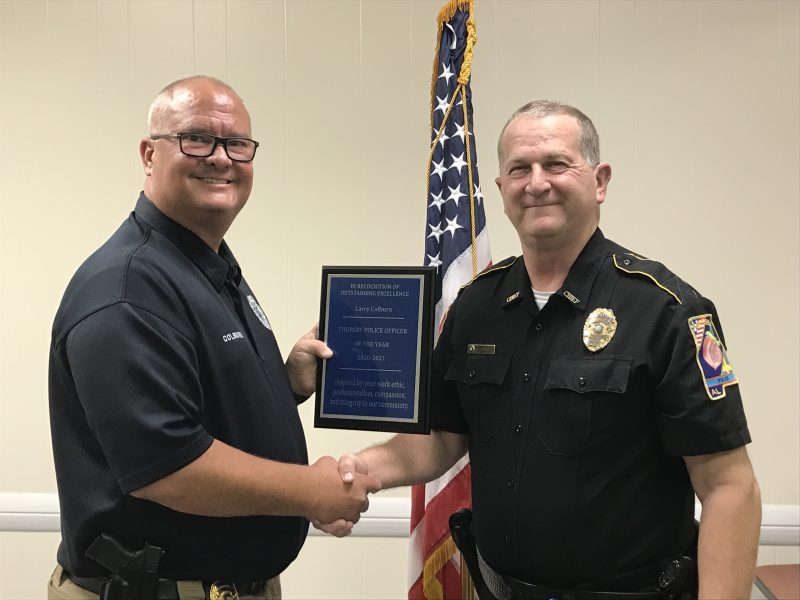 Larry Colburn, left, was named as the Thorsby Police officer of the year. He was presented the award by Thorsby Police Chief Rodney Barnett. (ZACHARY SEIFTER/ ADVERTISER)

Colburn spent much of the last year working in Thorsby High School. He was replaced at the school, but continued to patrol and protect the community of Thorsby.

“When you can tell someone is doing a good job is when you’re not hearing complaints and when you tell the principal somebody else is coming in, you see the long look on his face of concern and what’s next,” Barnett said. “I’ve never heard anything out of his mouth but positive (things) with Larry.”

Barnett had plenty of good things to say about Colburn and why he was deserving of the award. He talked about Colburn’s integrity, and what a great asset he is to the Thorsby Police Department.

“Integrity is what you do when nobody is looking,” Barnett said. “I think that one word would sum up Larry, and I’ve never heard anything bad said about Larry. He’s not a bad one to have with you … in the face of danger either.”

Colburn was presented with a certificate and a plaque to commend him for his efforts. He will also travel with Barnett to the 2022 Chiefs Conference for training.

Also at the meeting, the council discussed a number of issues to be voted on at their next meeting on Nov. 15. Among those issues was the possibility of selling the land that currently holds a baseball field and used to be the site for the elementary school to Thorsby First Baptist Church.

The council also approved the date for this year’s Christmas parade. The parade is set to take place on Dec. 4 at 9 a.m.