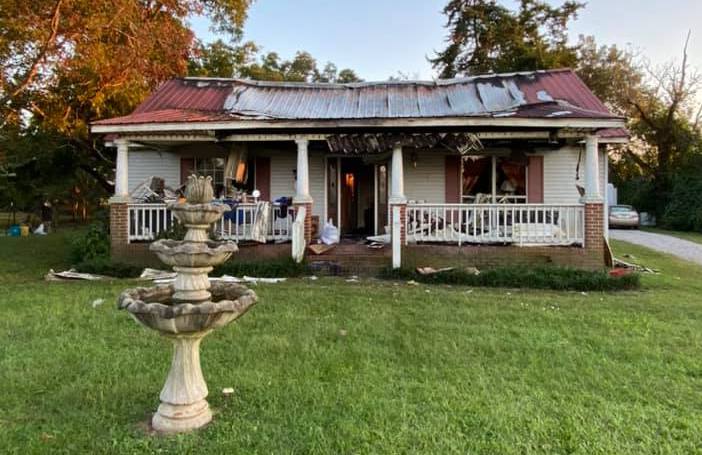 The Cleckler family house was destroyed in a house fire. Community members have come to help and support in numerous ways since then. (CLECKLER/ CONTRIBUTED)

The Cleckler family has seen an outpouring of care and support from friends and neighbors in the Enterprise community following a house fire a few weeks ago.

“Our community was just amazing,” Rex Cleckler said. “The whole county has been amazing.”

He said they were very thankful for everyone.

Cleckler had been eating lunch at home when he smelled smoke.

Cleckler was the only one home at the time, and he was able to get out in time.

However, the house and the family’s belongings were a total loss. Cleckler said it was true what he had heard in that moment, there is not time to grab anything because the fire moves so fast.

Heat from the fire caused some damage to Cleckler’s vehicle also.

Volunteer firefighters from across the county responded to the fire. Cleckler said he had known many would have been at work during the day.

“To my surprise, there were 10 volunteer fire departments that responded to that fire,” Cleckler said. “There were 34 firefighters on the scene.”

He said he was so appreciative for the work that they did.

The Chilton County Sheriff’s Office also responded to the scene and reached out asking what Cleckler needed. The CCSO chaplain also came to pray with Cleckler.

Neighbors responded with food, necessities and a camper for Cleckler, his wife Amy and their daughter to sleep in.

“Their response to try and help us has been overwhelming,” Cleckler said. “I want to give my heartfelt thanks to the people of our community for reaching out to help us in our time of need.”

He asked for continued prayers for himself and his family as they start over.

One friend also set up a GoFundMe page to raise funds for the family. A goal of $20,000 has been set, and donations are about halfway there.

Anyone wanting to donate can visit gofundme.com/f/cleckler-family-love-offering-home-burned .