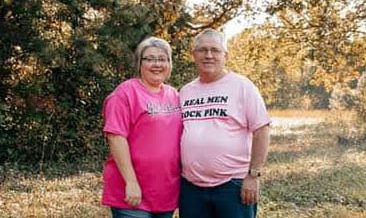 This time last year, Tammie Kizziah Jones of Jemison was in her bathroom and noticed her light fixture flickering. Replacing that light bulb saved her life, and she considers it a sign from God.

“I went to get a light bulb to replace the flickering one,” Jones said. “When I stood up on a chair and reached up to change the bulb, I could see in the mirror that my breasts were not symmetrical, and it looked like a lump on one side.”

Jones gave herself a breast exam and located a lump. Afterward, she scheduled a mammogram with her doctor.

Jones was diagnosed at age 49 and said that age does not determine who gets cancer.

“I had been putting off my doctor appointments for several years,” said Jones. “Going to have a mammogram would have found this sooner. God and the Holy Spirit sent me a message when my bathroom light flickered that day, and it saved me. Otherwise, I would have found this much later, and it might have been too late. Don’t put off going to the doctor, especially if you sense something is wrong. Listen to your body — you aren’t overreacting!  Better safe, than sorry.”

Jones’ grandmother also had breast cancer when she was in her 50s. Because of Jones’ family history, she had her DNA checked to determine if she carried the BRCA breast cancer hereditary gene, and she does not.

“You don’t have to be old to get breast cancer, it happens to men and women, young and old,” said Jones. “It can happen even if you don’t have the hereditary gene.”

Jones encourages others that have breast cancer to not battle the disease alone and that reaching out to breast cancer support groups can be found online, such as on Facebook or the American Cancer Society website, and are helpful to answering questions.

‘The Addams Family’ comes to CCHS