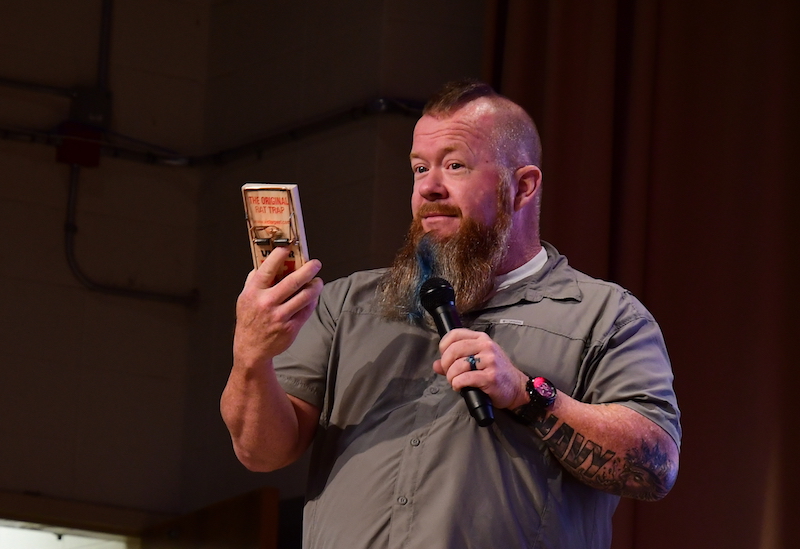 Pete Dorough uses a rat trap to talk about consequences to decisions. Hewears blue in his beard in memory of his Steven. (JOYANNA LOVE/ ADVERTISER)

In addition to awareness about the dangers of drug and alcohol abuse, presentations focused on the importance of making good choices.

At Verbena High School, high school students heard from Pete Dorough about his son Steven  and the choices that led to his death.

He said the choices that a person made impacted not only his son’s life but also the lives of several other people.

He talked about how each choice has consequences.

“It starts inside,” Dorough said, emphasizing that each student has the power to choose good things.

Dorough encouraged the students to talk to their parents or another trusted adult when they are facing a difficult situation.

“There are so many adults that will help you in any situation,” Dorough said.

Dorough told students whatever they are facing “You are not alone. You are not by yourself.”

He said it is important to have friends that are going to do the right thing even in difficult circumstances.

He talked about the power of forgiveness and how he had forgiven those who had killed his son.

“The reason I forgave them is because forgiveness is closure,” Dorough said. “It allows you to move on. It takes that anchor that is weighing you down to just a dark deep place and it lets that go. When you forgive somebody, you take control of your life again.”

He encouraged students to trust their parents feeling about people because Dorough had known about Chris “this kid’s no good.”

In 2009, Steven was making payments to his friend Chris trying to pay him back for items Steven’s other friends had stolen from Chris’s house when he was not home. Around Thanksgiving, Steven stopped making the payments in order to buy a present for his girlfriend, thinking that everything had been worked out.

After Christmas, Steven went over to Chris’s house after being invited several times. The group of teens there tried to start a bonfire, but it was not working so Steven and a 15-year-old started to walk back inside.

Dorough said at the moment, Chris shot Steven in the back of the head.

Chris later told police he had killed Steven because “I am going to show people that you will never mess with me again.”

The 15 -year-old asked to be taken home, and told his parents what had happened, who called the police. The teen later testified in the case.

“Above anything else, he was going to make sure that Steven was found, that Steven had closure,” Dorough said.

Chris and another boy involved in the murder were convicted.

Drugs and alcohol were found at the house.

“They (Drugs and alcohol) may make you happy, but they also take away … your inhibitions,” Dorough said. “When you take away your inhibitions, anything is possible — up to the point of pulling the trigger and shooting someone in the back of the head.”

The teens had even thought of how they were going to dispose of the body.

Dorough said he read all of the case files three years ago, so that he can tell Steven’s story to keep his son’s memory alive and help other students.