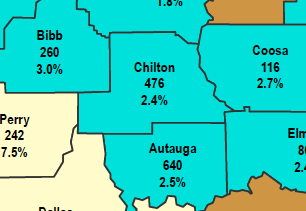 The unemployment rate for Chilton County dropped to 2.4% in September, representing 476 people.

That is a 0.4% decrease from the August unemployment rate.

“Our unemployment numbers continued to hold steady this month, even while our state and our nation grapple with an ever-changing labor environment,” Alabama Department of Labor Secretary Fitzgerald Washington said in a press release. “Alabama is working hard to ensure that all Alabamians who want a job have access to one, and that the state is doing all it can to help our employers find great employees and help their businesses thrive. Nearly 74,000 more people are working now than last year. Nearly 79,000 fewer people are counted as unemployed. We have made remarkable progress as we continue our economic recovery.”

Statewide average weekly earnings were stated to be $981.73 in September, a small decrease from what they were in August.

Industries that saw the greatest increase in wage and salary employment in September were government; trade, transportation and utilities sector; and the professional and business services sector.

Shelby County once again had the lowest unemployment rate in the state at 1.8%.

Wilcox County had the highest at 9.8%.