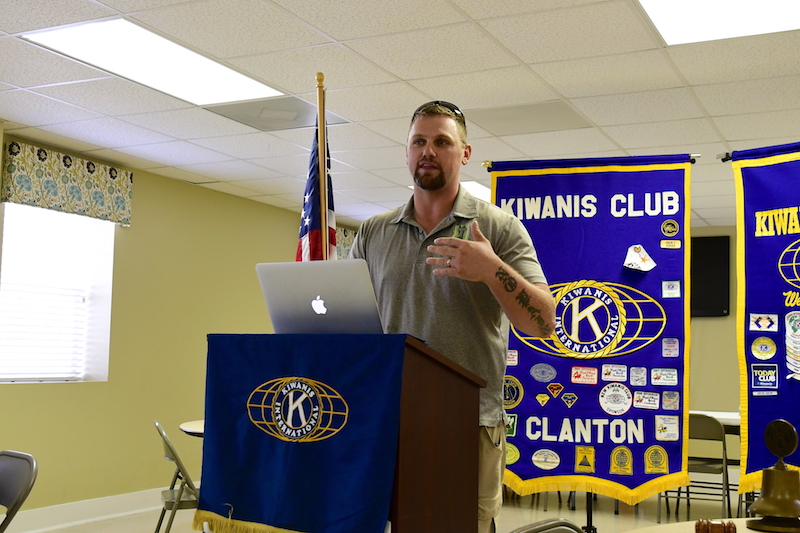 Mackay Barr of Ironsides Ranch gave the Clanton Kiwanis Club an overview of his unique approach to farming at its meeting on Oct. 14.

“What we do is regenerative ranching,” Barr said.

He said the approach is used by only about 2% of farmers/ ranchers right now.

“Basically, we are doing a chemical free process on our farm, and we try to let the animals, herbivores, omnivores, pigs, goats, cows … clean and to clear the land for us,” Barr said. “The whole premise is to let them heal the land. It starts with the premise that in nature there isn’t really any bare soil. The only bare soil we see is what man has created.”

He said the end result from the cattle is lean steaks that are chemical free and taste good.

“There is not actually a beef shortage right now,” Barr said. “There is shortage of beef at the store, but there are plenty of small farmers like us that have tons of beef and pork and chickens … available, and it is relatively easy to get on the list.”

The regenerative ranching approach emphasizes that all soil should be covered by something. The animals on the farm keep vegetation at bay.

“Before the Industrial Revolution, we didn’t use pesticides,” Barr said. “We didn’t use herbicides. We didn’t have the over medication of livestock,”

While he acknowledged that sometimes pesticides and medication are necessary, Barr said they are often overused.

“We let our customers know that the only chemical they will find on our farm is wasp spray,” Barr said.

A specific parasite resistant breed of cattle was chosen and measures are taken to move the cattle once a day.

“Organic matter in the soil back in the 1700s is estimated to be between 7 and 10 %, now it is less than one-tenth of one percent in most soils around,” Barr said.

Today, a soil is considered healthy if it has 1-2% organic matter in it.

To clear land under the regenerative ranching model, wood is harvested from a site and used as firewood, to make planks or are ground to put on top of the soil.

Barr said the wood creates a carbonaceous layer that absorbs the cattle’s manure, rather than it evaporating into the atmosphere. This manure becomes a natural fertilizer high in nitrogen.

“What we tell people is we are not as much ranchers as much as we are dirt farmers,” Barr said. “We are really just trying to create healthy soil, everything else just comes naturally from that.”

Having a carbonaceous layer also allows the soil to retain more water. Rocks are also left in the soil so as it breaks down and the minerals are released into the soil.

Ironsides Ranch is about three years old, and Barr expects it to turn a profit in two more years. He said it takes about 10 years to fully establish a farm with this type of farming.

Habitat for Humanity looking for next home owner