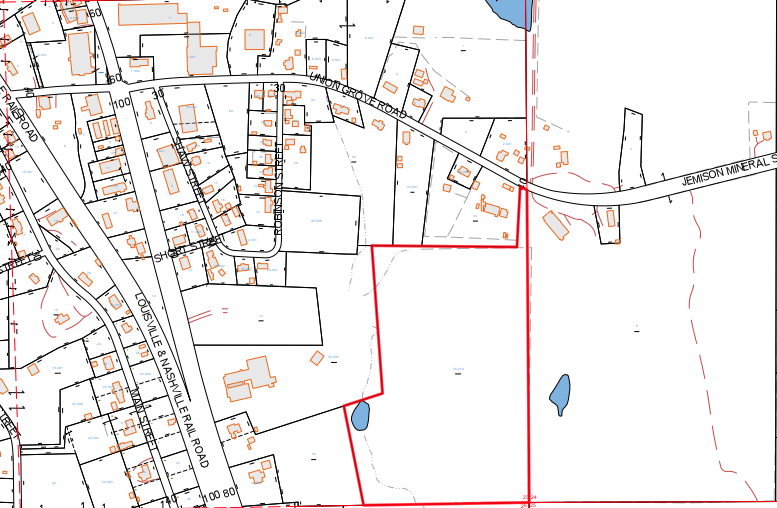 The property being discussed is outlined in red. (CHILTON COUNTY GIS/CONTRIBUTED)

The Jemison City Council unanimously rejected a rezoning request for 9214 County Road 42 E during a meeting on Oct. 18.

The rezoning request had been made by Clyde Northcutt to change the property from agricultural to residential planned unit development for multi-family housing. The plan had been to sell the property to The Vantage Group to build affordable apartments for those 50 years old and older

“That property will remain agricultural, which means then that apartments will not be built in that area,” Mayor Eddie Reed said.

He thanked all of the residents that had expressed their concerns.

During a public hearing before the vote, Reed asked the near capacity audience to raise their hand if they were against the request. The majority of the residents present raised their hands.

This was the second public hearing on the request. The previous public hearing was held on Oct. 12  during a Jemison Planning Commission meeting. During the two-hour public hearing, many residents expressed concerns about having multi-family development on their street.  These concerns included increased traffic, potential for increased crime, loss of property value, environmental concerns, not wanting apartments right across the street, lack of infrastructure and increased noise.

Other comments included that there were better uses for the land, that income-based housing would not benefit the city and that Jemison already has enough apartments. Many felt it would change the atmosphere and small town feel that they enjoy about Jemison, if a two-story apartment building was built.

A few were in support of the rezoning.