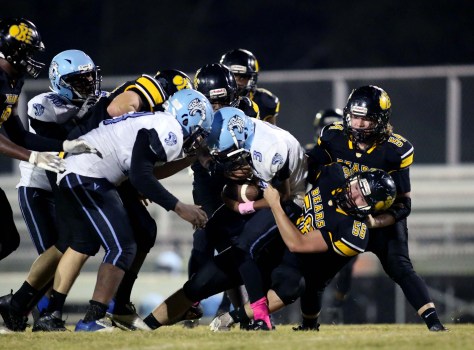 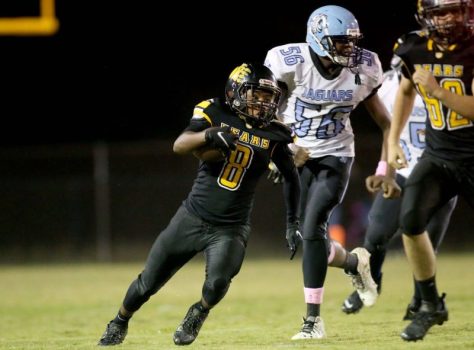 Billingsley High School not only picked up a big Homecoming victory on Oct. 15, but also punched its ticket into the playoffs thanks to a 63-0 victory over the visiting Barbour County Jaguars.

The Jaguars started the evening on offense, but after three plays that resulted in negative yardage, they turned the ball over on downs thanks to an incomplete pass on fourth and 12. One play later, Randriquis McCary put the Bears up 6-0 early in the first quarter with a 23-yard touchdown.

Another quick four-and-out by Barbour County set Billingsley up at the Jaguars 25-yard line. It took just one play for Kylan Thomas to make it 14-0, still early in the first quarter.

The ensuing kickoff by Billingsley was muffed by the Jaguars and recovered by the Bears at the Barbour County 32-yard line. One play later, Billingsley quarterback Levi Arington completed a pass to Thomas for another touchdown, giving the Bears a 20-0 lead midway through the first quarter.

After yet another four-and-out by Barbour County, Billingsley was set up with first and 10 at the Jaguars 25-yard line. Two plays later, McCary extended the Bears’ lead to would 26-0.

The Bears defense scored the next Billingsley touchdown as Ziondre Tyus recovered a Barbour County fumble in the end zone to make it 32-0 late in the second quarter.

Another first half score for the Bears came on the next Jaguars possession as Thomas picked off a pass attempt from Barbour County quarterback Kylan McLeod and returned it 46 yards, bringing the score to 39-0 at the halftime.

The start of the third quarter saw the Bears begin their longest drive of the game at their own 37-yard line. The longer field did little to slow down the Billingsley offense though, as it took just three plays for Arrington to get the Bears down the field. The quarterback capped the drive off with a one-yard touchdown run to put Billingsley up 45-0.

Another Jaguars turnover on the ensuing possession gave Billingsley yet another short field as the Bears began their drive at the Barbour County 21-yard line. Two plays later, a 10-yard touchdown run by Caiden Wilkins put the Bears out in front 51-0 early in the third quarter.

Billingsley went on to score two more touchdowns in the quarter as Andre Lee added a touchdown run from 55 yards out and Thomas scored from 20 away to bring the score to its final of 63-0.

Five different Bears found the end zone in the game. McCary led the way with three touchdowns on four carries, also picking up 74 yards on the ground.